My love affair with Austrian desserts

If I asked you to picture delicious European desserts in your mind, most of you would probably start imagining some sort of mouthwatering French concoction: macaroons, crepes, Creme Brulee, etc.

However, there is a country in Europe that often gets overlooked when it comes to dessert, but is right up there in terms of decadence and deliciousness: Austria.

This is the country that gave us the the Sacher Torte, the Linzer Torte, strudel, and a whole host of other delicious pastries.

While I was in Austria, I devoured two very popular desserts: the Sacher Torte and Salzburger Nockerl.

Well it just so happens that I was in Salzburg on my most recent trip to Europe and as you can see, an authentic slice of Sacher Torte was a necessary diversion in our sight-seeing schedule. 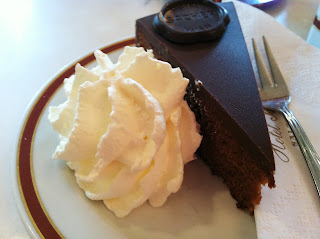 Now, as a rule, Austrian desserts are not as sweet as American desserts so when you look at the decadence of the Sacher Torte, just know that your taste buds are not going to be overwhelmed by sweetness. A Sacher Torte is a bittersweet chocolate cake with a thin layer of apricot jam in the middle. It is traditionally served with a generous dollop of unsweetened whipped cream on the side, some say to counter-balance the somewhat dry nature of the cake.

Now I am not a huge fan of chocolate, but even I will go out of my way to sit down and have a piece of this cake when I am in Vienna or Salzburg. Just make sure if you're ever in one of these two places that you have the ORIGINAL Sacher Torte and not an imitation.
The second dessert I inhaled while in Austria is not as well known as Sacher Torte, and is much more simple, but it is equally delicious: Salzburger Nockerl. 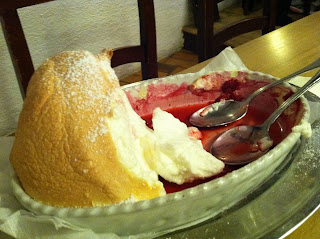 What is Salzburger Nockerl you ask? Well basically, it is a giant meringue that is cooked in the oven with a layer of fresh raspberries or fruit preserves like lingonberry jam. The Salzburger Nockerl my husband and I had at the Goldene Ente restaurant had fresh raspberries on the bottom. At first, Americans might balk at such a dessert because the sugar content is very minimal. In fact, as someone who often prefers salty foods to sweet, I kind of thought that the Nockerl needed a bit more sugar. 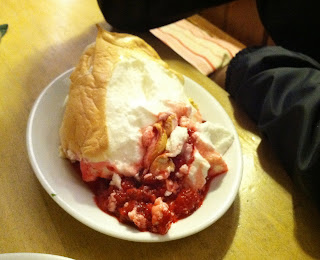 But as I think back on it, I think that more sugar would have perhaps masked some of the other exciting sensations happening inside my mouth while eating this dessert. The outside was crispy and golden brown and the inside was like eating a cloud. Then you have the tartness of the berries to add another layered dimension to the dish. Even though I kind of balked at the dessert while I was eating it, proclaiming the need for more sweetness, now that I look back on it, I can still feel the divine experience of  letting that light, fluffy meringue melt in my mouth and now I want to go in my kitchen and start whisking some egg whites.

To try your hand at making these desserts yourself, here are a couple recipes to give it a go: