Book vs. Movie: The Help

A few years ago, I was hearing a great deal of buzz about a novel called The Help by Kathyrn Stockett. I honestly didn't give this book any thought until I started hearing so many people talking about how amazing it was. So I decided to give it a go.

Boy am I ever glad I did. The novel was amazing.The characters just leaped off the page. I would often find myself thinking about the characters even after I put the book down. I'd be in the kitchen making dinner and thinking to myself, "I wonder what Skeeter's going to do about that" or "I can't believe Minny actually did that" or "Wow that Hilly is pure evil."

I was leery about whether the movie would succeed in making all of those characters leap off the screen like they leaped off the page of the book. I had my doubts that Emma Stone could pull off Skeeter. But I needn't have worried because the movie was amazing. All of the characters were wonderful and brought the book back to life in vivid detail. 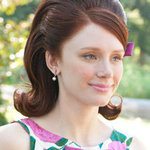 Every actor in this movie did an amazing job, but I really have to hand it to Bryce Dallas Howard who played Hilly. She was so good at being bad that she made me uncomfortable. I believed her as that character and I didn't want to because Hilly is such a horrible, awful person.

So you already know that I thought that actors were great, but was the movie true to the book? Well it's been a few years since I've read it, but I'd say it follows the book extremely well. It's probably one of the best book to movie adaptations I've ever seen. My only criticism is that Skeeter's romance with Stuart was so brief in the movie that it was almost a non-event. There was a much bigger focus on that part in the novel, but I understand why they decided to play that down. Still, it felt like it needed to have a bit more emphasis.

Overall, I am extremely pleased with the movie and loved it so much that I had to resist the urge to applaud when it ended.
at 7:14 PM

Email ThisBlogThis!Share to TwitterShare to FacebookShare to Pinterest
Labels: book vs. movie