While I was in Germany, I had the privilege of visiting with Lenore Appelhans and her husband Daniel Jennewein in Frankfurt (recap of our splendid time here).

Before I left their house, I ended up having to rearrange my suitcase because she sent me on my way with these 8 books to take home with me: 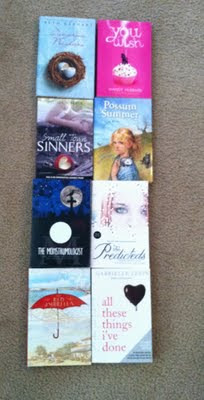 Dangerous Neighbors by Beth Kephart
You Wish by Mandy Hubbard
Small Town Sinners by Melissa Walker
Possum Summer by Jen K. Blom
The Monstrumologist by Rick Yancey
The Predicteds by Christine Seifert
The Red Umbrella by Christina Gonzalez
All These Things I've Done by Gabrielle Zevin

Thanks again Lenore! You are made of awesome!

Books I bought in Germany: 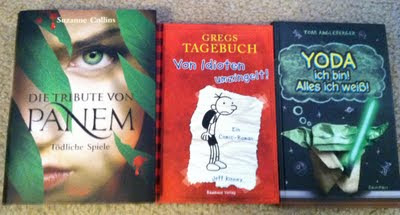 The Hunger Games by Suzanne Collins
Diary of a Wimpy Kid by Jeff Kinney
The Strange Case of Origami Yoda by Tom Angleberger
I have no delusions that I'll actually be able read these books, but I just like having them on the shelves. I know some German, so maybe the drawings in Diary of a Wimpy Kid will help me figure out what I'm reading.  The Hunger Games, however, would probably take me a lifetime to figure out.

Check out my larger post about my trip to a German book store.

Wanderlove by Kirsten Hubbard
Super excited for this one! It was my Waiting on Wednesday pick a few weeks ago.
Chomp by Carl Hiaasen
I love Carl Hiaasen's middle grade books. I was all agog to see he has a new one coming out. How can you not love his book covers?

I went to Borders to mourn and I bought a couple books:

Page by Paige by Laura Lee Gulledge
Delirium by Lauren Oliver
I was very excited to get the special edition paperback cover, but in a hardcover!


From my library's used book store: 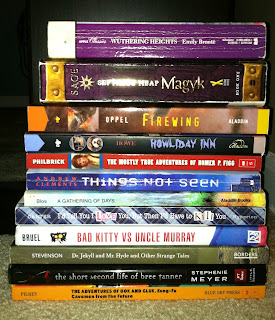 The Adventures of Ook and Gluk, Kung-fu Cavemen from the Future by George Beard and Harold Hutchins
The Short Second Life of Bree Tanner by Stephenie Meyer
Dr. Jekyll and Mr. Hyde and Other Strange Tales by Robert Louis Stevenson
Bad Kitty Vs.Uncle Murray by Nick Bruel
I'd Tell You I Love You, But Then I'd Have to Kill You by Ally Carter
A Gathering of Days: A New England Girl's Journal, 1830-32 by Joan w. Blos
Things Not Seen by Andrew Clements
The Mostly True Adventures of Homer P. Figg by Rodman Philbrick
Howliday Inn by James Howe
Firewing by Kenneth Oppel
Magyk by Angie Sage
Wuthering Heights by Emily Bronte

Vincent Van Gogh and the Colors of the Wind by Chiara Lossani, illustrated by Octavia Monaco
Diego Rivera: His World and Ours by Duncan Tonatiuh

Can We Save the Tiger? by Martin Jenkins, illustrated by Vicky White
Naked Mole Rat Gets Dressed by Mo Willems 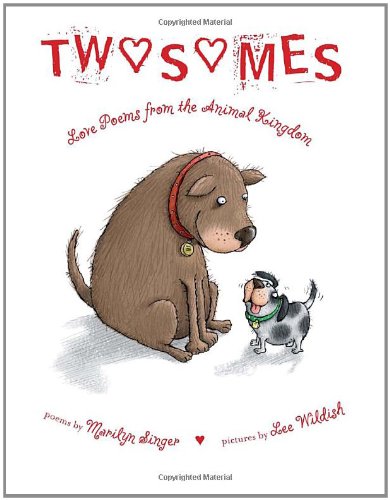 Twosomes: Love Poems from the Animal Kingdom by Marilyn Singer, illustrated by Lee Wildish
Dizzy in Your Eyes: Poems About Love by Pat Mora

What did you get in your mailbox this week?
at 6:00 PM