I'm humming tunes from Avenue Q as I write this

Germans have a word that does not directly translate to English, but has crossed over into our language because it's just such a wonderfully descriptive word: Schadenfreude. If you've never heard of this word before, basically it means happiness at the misfortune of others.

There was a bit of Schadenfreude going on during the Czech Republic portion of my trip to Europe.

One of the things we wanted to do while we were in Cesky Krumlov was rent a canoe since the river snakes around the city. We thought it would be a perfect way to get the lay of the land and to see great views of the city.

When we arrived at the canoe rental, which just happened to be in the same building as our hotel, the lady working the desk showed us a picture of where to drop of the canoe/raft further downriver and informed of us of two places where we needed to be on alert because there were rapids and we needed to travel through a weir in order to pass through safely. Both weirs had rapids, but we were assured that they were mild, but said that we needed to make sure we hung onto or things tightly if the boat tipped over because the current would surely carry it away.

This worried me a little bit but my husband assured me we would be fine. After getting through the first set of rapids without any incident I was feeling confident and seemed to relax. I was taking pictures and just enjoying the lovely view of Cesky Krumlov from our canoe: 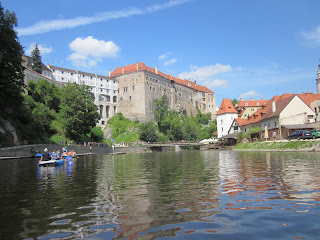 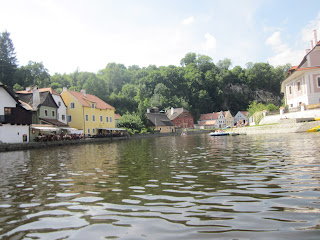 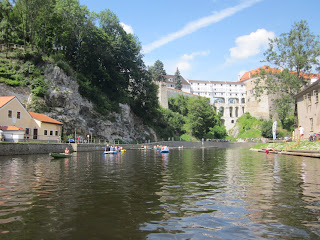 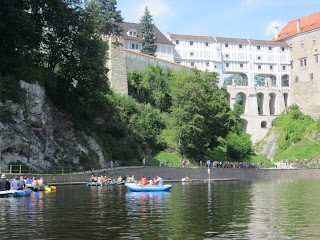 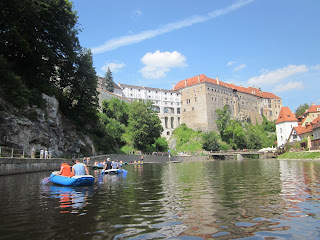 But then this would be the last picture our little point-and-shoot camera would take because right after I took this picture, disaster struck: 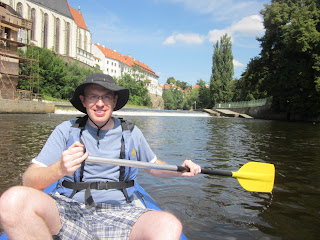 As we approached the bottom of the second weir and the rapids were more aggressive than the first, our entire boat tipped over and we were in the water. Thankfully the water wasn't deep, but the shallowness of the water caused me to scratch up my leg on some rocks and also caused one of my oars and a shoe to go floating down the river.

At this point we had a whole chorus of Czechs along the side of the river just laughing hysterically at our expense, which was bad enough on its own, but I was freaking out as I thought for sure I'd never see my shoe again - and it was the only pair of comfortable walking shoes I had with me.

Thankfully, between chortles, we had a family with a baby (who managed to get through the rapids without losing their first born) pull off to the side and grab our oar for us so at least we wouldn't have to pay for losing that. And that was all well and good, but I was most worried about my shoe, as I was thinking I would have to walk the streets of Cesky Krumlov with only one shoe. By some miracle, some old man, who looked as old as the river itself and who was wearing swimshorts so short that they were almost speedos, was standing on the side of the river, holding up my shoe. I might have hugged him if I hadn't been so worried I'd lose something else out of the boat.

While we were lucky that our oar and my shoe were returned to us, something else did not survive our "incident" and that was our camera. We didn't lose the camera, it was in my pants pocket, but the water destroyed any chances of it ever working again. We were lucky that the SD card still worked so we were able to rescue the pictures on it, but the camera itself is kaput. Thankfully we had also had a digital SLR with us on our trip (not in the canoe thankfully) so it's not like we didn't have a camera for the rest of the trip, but it was such a bummer since our little Canon Powershot is what we'd take with us when we were going places where we didn't want to carry a huge camera with us.

The next day as we were exploring the castle grounds above the town, I found myself looking down at the place in the river where my husband and I bit the big one, and hoping the people going through the weir would tip over like we did, just so I didn't feel like the only idiot in town who couldn't remain upright in a canoe. 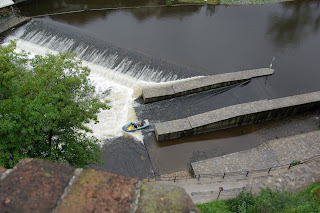 Darn! That one made it. 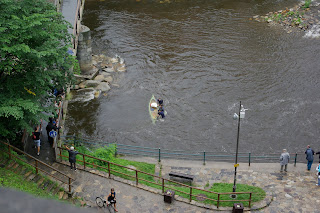 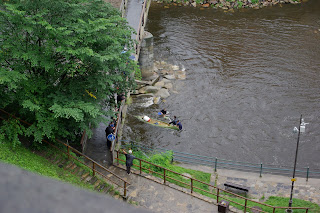 OK, now I don't feel like such an idiot. Except now I'm a terrible person because I was happy that these guys tipped over. Total and complete Schadenfreude. Does that make me a bad person? Maybe, but it also makes me human.

P.S. if you don't understand what the title has to do with my actual post, Google the track list for the musical Avenue Q and you'll understand. (Warning: If you don't already know, the songs in Avenue Q have a great amount of obscenities so don't listen to any of the songs at work or around little children.)

What have been your Schadenfreude moments?
at 12:00 AM