Audiobook review: After the End by Amy Plum 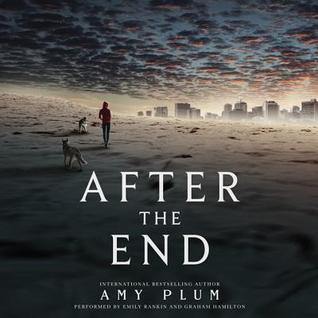 Juneau Newhaven has lived her entire life in the Alaskan wilderness believing that thirty years earlier, the world had been decimated by World War III. Her clan are the only people she has ever encountered in her short life.

One day Juneau returns from a hunting trip to discover that her clan has been kidnapped and they had been lying to her all along. World War III never happened and civilization not only exists, but is thriving. Now Juneau must figure out what in her life has been true and what has been a lie. But in the meantime, she must also figure out how to navigate a world she has never encountered, while also dealing with a new truth: someone is after her and she doesn't know why.

Told in alternating chapters of dual narration, both from the main protagonist Juneau and also Miles Blackwell, the boy who locates Juneau and says he'll help find her clan, but he really plans on taking her back home to his father, the man who is looking for her, for what reason she has no idea.

Strange premise, but an engaging read. I enjoyed the writing and the storyline a great deal. I especially enjoyed Emily Rankin and Graham Hamilton's narration of the audio. Both brought the characters of Juneau and Miles to life. Here's what I didn't like, however:  I still get really irritated with the trend in YA lit today that series books can't stand on their own and there has to be a "to be continued..." Cliffhanger endings are one thing, and I don't mind them as long as most of the conflict that has been building in the novel has been somewhat resolved, but to leave something completely unresolved just to pick it back up in the next book really bothers me.

Despite being perturbed by the ending, I am still interested to see how book two plays out and look forward to reading it or listening to it when it comes out.