Lenore Appelhans's second book, CHASING BEFORE, is out in stores today. It is the sequel to her amazing debut novel, THE MEMORY OF AFTER.

I interviewed Lenore prior to her first book coming out (originally titled Level 2) so I thought it was only appropriate to catch up with her now that book two is out in stores.

“I’m a ticking time bomb. And one day soon everything is going to explode.”

Felicia and Neil have arrived in Level 3 and are supposed to prepare for their divine vocations.

But during Felicia and Neil's training period, a series of explosions rips through Level 3. Tension is high, and casualties are mounting. A rift forms between the pair, one that grows wider when Felicia receives memories from the Morati. The memories cast doubt on the people she loves the most, but Felicia can't stop her curiosity. She has to know the truth about her life – even if it means putting at risk everything she’s worked for in her death.


Foodie Bibliophile: For readers who might not know the story, can you explain the reason for the title change of your first novel?

Lenore Appelhans: My understanding is that the “2” in LEVEL 2 made people think that it was a

sequel and that the first book must be called LEVEL 1. S&S decided a new title, without a number, would work better for the paperback. THE MEMORY OF AFTER was a title that both the publisher and I came up independently, so great minds!


FB: How did THE MEMORY OF AFTER morph and change once you knew you would be writing a sequel?

LA: I knew very early that there would be two books. In my original outline of LEVEL 2, there were a bunch of twists at the end, and my editor suggested moving some of those revelations to book 2. One of the big twists sets up the plot of CHASING BEFORE, so it was really pretty perfect!


FB: You share your playlists and favorite artists with readers. How does music influence your writing?

LA: Pieces of music, much like specific scents, have the power to jumpstart your memory and take you back to special moments in your life. When I’m working on a book, I’ll often put my iTunes on shuffle or listen to random stuff on Spotify. Sometimes a lyric or a certain atmosphere will catch my ear that I think works for a scene or a character and I’ll put it on the playlist. Then, before I work on that scene or a scene with that character, I’ll listen to the song or songs to get me in the right frame of mind for that writing session. 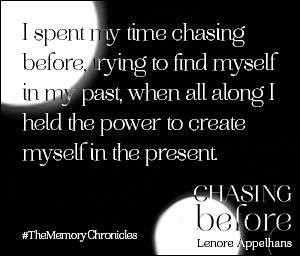 FB: Around the time edits were due for CHASING BEFORE, you became life-threateningly ill and spent weeks in the hospital. How did the fact that you have written two books set in an imagined afterlife put that experience in perspective for you?

LA: I didn’t know until after I was already out of danger just how close to death I had been (minutes to hours apparently). It certainly struck me as freaky that I have afterlife books. And this is morbid, but I actually said to my husband, “well, if I had died, then my publicist could have spun that into a good story to sell the books.”

Having a near death experience certainly put so much in perspective for me. I don’t worry as much anymore. I’ve been through the fire, and emerged fearless in a way. I think Felicia goes through a similar transformation in the series.

LA: I just started my first semester of the Writing for Children and Young Adults MFA program at Vermont College of Fine Arts. It has been a transformative experience so far and I am looking forward to digging deeper than I ever thought I could go. I am working on a contemporary YA with a possible magical realism element and am in the process of really getting to know the main character.


Thanks so much for stopping by the blog today Lenore! I wish you much success with your second book!

Read my review of CHASING BEFORE

Buy the books in The Memory Chronicles series:

If you buy these books or any book through Amazon, it is my hope that you also regularly patronize independent bookstores, which are important centerpieces of thriving communities. While I am an Amazon Affiliate, that by no means implies that I only buy my books through their website. Please make sure you are still helping small, independent bookstores thrive in your community. To locate an independent bookstore near you, visit IndieBound.
at 2:00 AM