Why I Love Dogs

Ever since I was a little kid, I have always had a soft spot in my heart for dogs. All dogs. It doesn't matter if it's a large, regal Great Dane or a puny, hairless Chinese Crested, dogs just make me happy.

Yesterday was a perfect example for me of how loyalty to one's owner is exactly why they're man's (or woman's) best friend.

A few Saturdays ago I had to have my husband take me to the ER because I was having severe abdominal pain. Three hours and a bunch of tests later, they never did find out what was wrong with me. While I was there, they gave me xylacaine and an anti-inflammatory along with a prescription for an acid reducer and then sent me on my way.

I knew I wanted to pursue the problem further because even though their wonderful drugs took the pain away, it still felt like there was something there festering inside my stomach. So I went to my family doctor and he set me up to get a gastroscopy so they could look inside my stomach to see what the problem was.

I had that test yesterday morning. It basically involves getting put to sleep and then the doctor sticks a tube down your throat and into your stomach to look for any obvious problems (tumors, ulcers, etc.) but then they also do some biopsies so they can test for not-so-obvious problems (H. Pylori, Celiac's Disease, etc.)

After waking up from the anesthesia, the doctor told me I had some gastritis but no tumors or ulcers (phew!) and that I should get the results of the biopsies soon.

About an hour after I left the hospital, I developed a low-grade fever. Technically I was supposed to call the doctor at that point, but my mom was taking care of me and I trusted her judgment since she's been a nurse for over 40 years. She told me that I really shouldn't worry about a fever unless it goes over 101.

Still, despite the fact that my fever was low, I felt awful. All I wanted to do was lie in bed.

I took my dogs with me over to my mom's because she also has two dogs, along with a fenced in backyard, and they all love to play together so I thought that it would be better for them to hang out and play together than for me to leave them home in their kennel.

My one pug Frank, however, was extremely worried about me. He would not leave my side. Normally if I am lying in bed, he is constantly begging to get on the bed with me. But yesterday, something extraordinary happened. He didn't bother me. But he wanted to make sure I was OK, so he just lay on the floor right next to the bed. 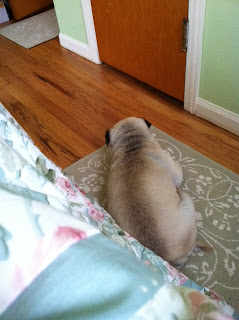 I was so touched by his concern for me. You have to understand that this is not normal behavior for this dog. He is a lap dog to the nth degree and will climb up on strangers' laps just because it looks cozy.

After I started to feel a little better, and was getting up and walking around for a few minutes at a time, he started to beg to come up on the bed with me a little bit, but when he realized I wasn't bringing him up with me, he just lay back down on the floor next to the bed again.

The other three dogs played with each other and acted like I wasn't even there, but Frank stayed with me the whole day. Pretty much all the time we've had him he's been a Daddy's Boy because my husband has a bigger, cozier lap than I do, but yesterday, if only just for one day, he was a Mama's Boy.
at 2:26 PM

Email ThisBlogThis!Share to TwitterShare to FacebookShare to Pinterest
Labels: dogs