In My Mailbox is a weekly meme hosted by The Story Siren. The books you share do not have to be ones you actually received in the mail. They can be ones you bought at the book store, checked out at the library, or downloaded to your e-reader. The idea is just to share what's on your TBR pile for the upcoming week.

This was another prolific book week for me.

When Life Gives You O.J. by Erica S. Perl
Racing in the Rain by Garth Stein

The Goddess Test by Aimee Carter
I actually got to meet Aimee today at Carrie Harris's book launch party for Bad Taste in Boys (pictures and recap to come soon!) and she was gracious enough to sign it for me since I'll be in Germany during her event on August 5th: 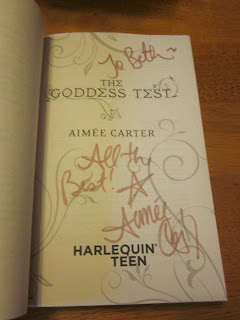 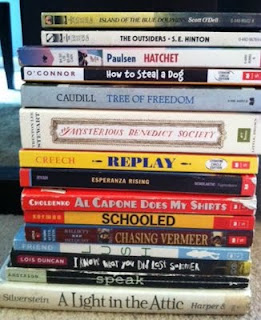 A Light in the Attic by Shel Silverstein
Speak by Laurie Halse Anderson
I Know What You Did Last Summer by Lois Duncan
Lush by Natasha Friend
Chasing Vermeer by Blue Balliett
Schooled by Gordon Korman
Al Capone Does My Shirts by Gennifer Choldenko
Esperanza Rising by Pam Munoz Ryan
Replay by Sharon Creech
The Mysterious Benedict Society by Trenton Lee Stewart
Tree of Freedom by Rebecca Caudill
How to Steal a Dog by Barbara O'Connor
Hatchet by Gary Paulsen
The Outsiders by S.E. Hinton
Island of the Blue Dolphins by Scott O'Dell 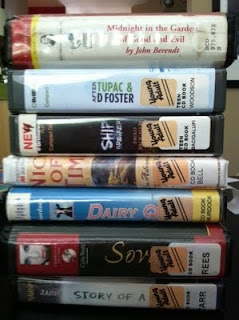 I went a little crazy with the audiobooks this week because I'm leaving for Germany on Friday and I wanted to load a bunch of books on my iPhone so I have stuff to keep me occupied.

The Bear Who Shared by Catherine Rayner
A River of Words: The Story of William Carlos Williams by Jen Bryant, illustrated by Melissa Sweet

She Loved Baseball: The Effa Manley Story by Audrey Vernick, illustrated by Don Tate
Jimi Sounds Like a Rainbow: A Story of the Young Jimi Hendrix by Gary Golio, illustrated by Javaka Steptoe

What did you get in your mailbox this week?
at 8:23 PM