Of Roadtrips, Barbecue, and Southern Hospitality

Over Fourth of July weekend, my husband and I drove from Michigan to North Carolina for a family wedding. I am never one to pass up an opportunity for a trip to revolve around food in some way, so I promptly researched the barbecue options in the area since we all know North Carolina has a proud barbecue tradition.

Upon arriving in Bermuda Run at 6:00 on Friday evening, we checked into our hotel, then drove 15 minutes southwest to Mocksville. We had a little trouble finding Deano's because our GPS navigated us a bit funny, but we soon stumbled upon it which felt like we were pulling into a barbecue oasis: 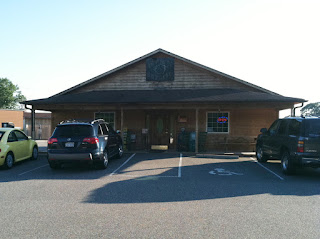 The second we walked in the door, I could tell that people knew we weren't from these parts. The door closed behind us and it was like those scenes in a movie where the jukebox is playing and as soon as you walk in, the music stops and everyone turns to look at you.

OK, so it wasn't that extreme, but that's what it felt like.

This was clearly a local establishment and everyone sized up we were visitors as soon as we walked in. But the looks and stares didn't last long because they were soon replaced with welcomes and friendly chatter. There were two waitresses working at Deano's the evening we were there and they both helped us and chatted about what brought us to North Carolina.

This place defined southern hospitality. Not only was the staff helpful and accommodating, but Deano himself, walked around and chatted it up with his patrons.

Even though there weren't many people sitting around eating, there were constantly people coming in and out to pick up take-out orders. This place had a "we just stepped back in time" feel to it, but in a homey, comfortable way, not a "OMG! Get me out of here!" kind of way.

I mean, just look at the staff entrance to the kitchen behind my husband - it's one of those old wooden screen doors that you always tell everyone is annoying when it slams 100 times a day but you secretly find the sound comforting. It's the sound of porch swings, lazy summer days, and kids coming in and out of the house from playing outside until it's too dark to see the game of kickball they were playing, so they go back outside to catch lightning bugs instead. 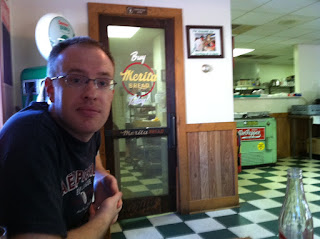 Everything about this place shouted, "You are our guest, but we want you to feel at home."

We didn't have to wait long before these beautiful plates of barbecue were placed in front of us:
There was no fanfare or fancy presentation. It came out on a styrofoam plate. Then again, barbecue isn't supposed to be fancy. What it lacks in appearance it makes up for in flavor and that satisfied sigh of a full stomach .

Upon paying our bill, we waved goodbye to our new friends, and were warmly serenaded with express hopes from everyone, even Deano himself, that we come back some day. These are the types of dining experiences I long for when I travel. Off the beaten path, comforting, but most of all, true to the region and culture of the area. We could have just as easily driven to the Wendy's down the street from our hotel to get dinner. But instead, we took a little time to go out of our way to seek out something authentic and satisfying. I encourage you to do the same.

What has been your favorite authentic food experience while traveling?
at 10:21 AM