'Tis the Season to be Canning

I do not keep it a secret that I despise the vapid consumerism of this time of year. I avoid the mall and most stores in general from Thanksgiving to New Year's. I have instead chosen to make many Christmas gifts for friends and family.

This year I did quite a bit of canning, and this is what my pile of gifts looks like: 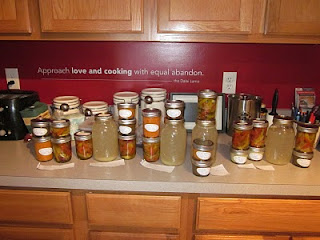 For seven people I made:

This was much more satisfying to me than spending hours and excessive money at the mall. And maybe the people I give these gifts to don't even like the things I made for them, but so what? You run the risk of that when you buy something random at the mall too. I at least had fun making my gifts, and I did so with less stress and mood swings than if I had gone out and bought all those gifts. If they don't like the things I made, I hope they'll at least pass them along to someone who will.
at 9:35 PM