The Sharper Your Knife the Less You Cry: Love, Laughter, and Tears at the World's Most Famous Cooking School by Kathleen Flinn 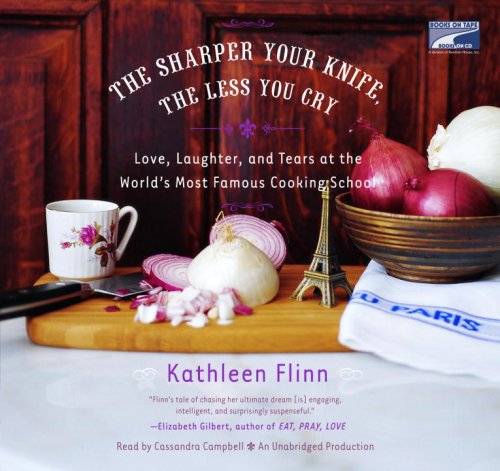 In 2003, Kathleen Flinn is laid off from her corporate job in London and decides, rather than immediately looking for a new job, she'll use her life savings to move to Paris and enroll in Le Cordon Bleu cooking school. With the support of her boyfriend Mike, they embark on new rites of passage in their careers, in their lives, and in love.

I listened to the audiobook and I thoroughly enjoyed every aspect of this memoir, from the unpretentious writing, down to the soothing, mellifluous voice of Cassandra Campbell, the narrator, who made each of Flinn's Cordon Bleu dishes sound mouth-watering - even if I never would dream of making it in a million years.

It was interesting to read a modern-day "behind-the-scenes" perspective at Le Cordon Bleu. I appreciated what hard work it is to earn a diploma there, but as much as I love cooking, there's no way I'd ever want to learn in such a disciplined environment. I'm anxious to do further research to see where this experience led Flinn after she received her diploma.

Three parts memoir, one part cookbook, the one aspect that made me wish I had read the book rather than listened to it is all of the delicious recipes included at the end of each chapter and also at the end of the book. I may decide to purchase a hard copy of the book just for the recipes alone. If you love food and you're a sucker for food memoirs, this book is a can't miss.


The Sharper Your Knife the Less You Cry: Love, Laughter and Tears at the World's Most Famous Cooking School by Kathleen Flinn
Published: October 2007 by Viking (audiobook produced by Books on Tape)
Pages: 285
Genre: Memoir
Audience: Adult foodies
at 9:38 PM