In My Mailbox is a weekly meme created by The Story Siren.

Not too much loot from the library this week:


What I didn't get at the library, I made up for by attending a Scholastic warehouse sale. Has anyone ever been to one of these? They basically let the general public come in and raid the warehouse and let you purchase the books at an even deeper discount. All the books I purchased are for my classroom except for one (Easy as Pi) which is a Christmas gift. I got 13 books for $42!! How awesome is that? Check out my loot: 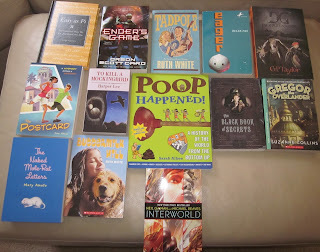 Yes, I did buy a book called Poop Happened. Anything to get boys into reading. :o) It actually looks pretty informative. I think I might read it too.

Easy as Pi: The Countless Ways We Use Numbers Every Day by Jamie Buchan
Ender's Game by Orson Scott Card
Tadpole by Ruth White
Eager by Helen Fox
The Dopple Ganger Chronicles: The First Escape by G.P. Taylor
The Postcard by Tony Abbott
To Kill a Mockingbird by Harper Lee
Poop Happened: A History of the World from the Bottom Up by Sarah Albee, Illustrated by Robert Leighton
The Black Book of Secrets by F.E. Higgins
Gregor the Overlander by Suzanne Collins
The Naked Mole-Rat Letters by Mary Amato
Buttermilk Hill by Ruth White
Interworld by Neil Gaiman and Michael Reaves


I also won an awesome prize pack from Jaidis at Juniper Grove: 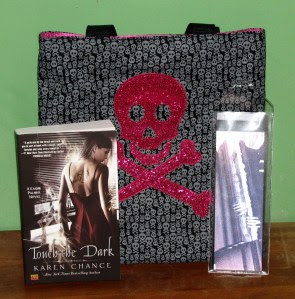 - Touch the Dark by Karen Chance
- A cool holographic bookmark
- An adorable skull tote bag. (whoever thought you could use the word skull and adorable in the same sentence?)

As much as I love the tote bag, it's not very big to tote much stuff around in it. I was thinking of maybe using it as a purse, but the straps aren't big enough to put on my shoulder, and I'm really a shoulder purse kid of girl. I don't want to give it away because I looooove it so much. So tell me: what should I use it for?
at 9:14 AM