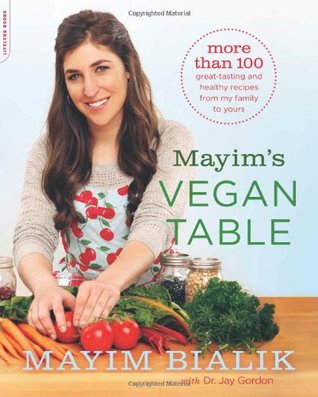 I have been tackling many vegan cookbooks as of late, not because I want to become a full-time vegan, but because I am looking for more ways to add plant-based main dishes into my diet. Out of all the vegan cookbooks I've read and tried, I have to say that Mayim's Vegan Table is my favorite thus far. Bialik and Dr. Jay Gordon spend a lot of time in the introduction talking about the vegan lifestyle and dispelling some of the myths that go along with it. Unlike previous vegan cookbooks I've read, Bialik and Gordon don't gloss over and/or dismiss the fact that making the decision to become vegan is a difficult one. They are candid and straightforward about what a difficult and time-consuming decision this can be in those first few months. So the fact that they were real about it rather than trying to sweep the elephant in the room under the rug, to mix my metaphors here, was refreshing to say the least.

But more important than their candidness was whether their recipes could stand up to my scrutiny. I've always said if this were a straight up food blog I would call it "The Finicky Foodie" because, while I love good food and trying new things, I'm still a picky eater at heart. Well I'm here to say that the recipes in Mayim's Vegan Table are quite good and definitely worth a try. I've had a few misses, but on the whole, most of the recipes I tried not only turned out successful, but were ones that I'll make again.

One such recipe is Bialik's Quinoa Burgers. I'm here to tell you that I really dislike anything that tries to be something it's not. And while this recipe has burger in  the name, it's really more of a quinoa patty. You can eat it like a burger with a bun and all the fixins, but it's not really going to fool anyone into believing it's an actual burger. The difference between this burger and those frozen fake meat burgers at the grocery store is that with ingredients like potato and quinoa, this isn't trying to be a meat substitute. It's a sturdier version of a potato pancake more than a burger, truth be told. And that's when vegan recipes are more successful and delicious in my mind: when they celebrate what they are rather than what they're not. So with that said, I don't recommend the mac and "cheese" recipe. It mimicked the creamy texture of something along the lines of Velveeta shells and cheese, but the taste was much too earthy and sour to feel like you were eating an acceptable substitute to real mac and cheese.

I also gave one of Bialik's desserts a try, her chocolate fudge cake that used silken tofu for the frosting. The cupcakes were good at first, but the longer they sat (and I'm talking hours here, not days), the stranger the texture became. A few people who tried the cake even commented on the fact that it dried out your mouth after a few minutes. It was also shinier and had a much bigger crumble than a traditional cake. And while it was pretty good hot out of the oven, I have to say, the quality of the taste and texture deteriorated after a few hours, so I'm not going to recommend this chocolate cake recipe to anyone any time soon.


I will, however, highly recommend the quinoa burgers, and will post the recipe right now:

1. Preheat oven to 350. Place the potato in a small saucepan and cover with water. Bring to boil and then simmer for 12 minutes or until tender. Drain.
2. In a medium saucepan, combine quinoa and 3 cups of water and bring to boil. Lower the heat to low and simmer, covered, until all the water is absorbed, about 10-15 minutes.
3. In a large bowl, mix the cooked potato and quinoa with all the remaining ingredients except the oil. Shape into four 3-inch diameter patties.
4. In a 10-inch skillet, heat the oil over high heat. Place each patty in the oil and fry until browned on both sides, about 2 minutes. Remove the patties and place them in an oven-safe dish. Pat the patties with a paper towel to remove excess oil.
5. Bake for 10 minutes.