This was another prolific week for me at the used book store. 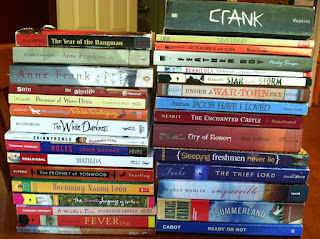 James and the Giant Peach by Roald Dahl
Fever 1793 by Laurie Halse Anderson
A Wrinkle in Time by Madeleine L'Engle
The Secret Language of Girls by Frances O'Roark Dowell
Becoming Naomi Leon by Pam Munoz Ryan
The Prophet of Yonwood by Jeanne DuPrau
Matilda by Roald Dahl
Holes by Louis Sachar
Skinnybones by Barbara Park
The White Darkness by Geraldine McCaugherean
The Secret Blog of Raisin Rodriguez by Judy Goldschmidt
Because of Winn-Dixie by Kate DiCamillo
The Afterlife by Gary Soto
Anne Frank: The Diary of a Young Girl
Anne Frank and Me by Cherie Bennett and Jeff Gottesfeld
The Year of the Hangman by Gary Blackwood
Ready or Not by Meg Cabot
Summerland by Michael Chabon
Impossible by Nancy Werlin
The Thief Lord by Cornelia Funke
Sleeping Freshmen Never Lie by David Lubar
Stravaganza: City of Flowers by Mary Hoffman
The Enchanted Castle by E. Nesbit
Jacob Have I Loved by Catherine Paterson
Under a War-Torn Sky by L.M. Elliott
Star in the Storm by Joan Hiatt Harlow
Bunnicula by Deborah and James Howe
Feather Boy by Nicky Singer
My Teacher is an Alien by Bruce Coville
Nim's Island by Wendy Orr
Crank by Ellen Hopkins 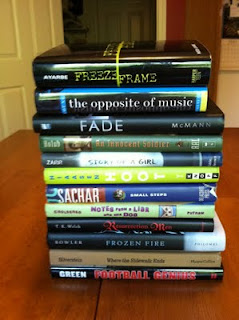 Football Genius by Tim Green
Where the Sidewalk Ends by Shel Silverstein
Frozen Fire by Tim Bowler
Resurrection Men by T.K. Welsh
Notes from a Liar and Her Dog by Gennifer Choldenko
Small Steps by Louis Sachar
Hoot by Carl Hiaasen
Story of a Girl by Sara Zarr
An Innocent Soldier by Josef Holub
Fade by Lisa McMann
The Opposite of Music by Janet Ruth Young
Freeze Frame by Heidi Ayarbe

I used up some of my Scholastic bonus points to finish off the school year and add to my library for next year: Strings Attached by Judy Blundell
The Dreamer by Pam Munoz Ryan
Marcelo in the Real World by Francisco X. Stork
Bang! by Sharon G. Flake
Will Work for Prom Dress by Aimee Ferris
The Suburb Beyond the Stars by M.T. Anderson
The Last Invisible Boy by Evan Kuhlman
Immortal by Gillian Shields
My One Hundred Adventures by Polly Horvath
The Golden Dream of Carlo Chuchio by Lloyd Alexander
Wolves, Boys, and Other Things That Might Kill Me by Kristen Chandler

Some of you may have noticed that I get books with quite a variety of age-ranges. Sixth grade is one of those years where kids can have such a wide range of reading abilities and maturity-levels. Every year I have some students who are inevitably ready for those "mature" young adult books even though they're only twelve, but then I also have kids who struggle and still need to read those books like Skinnybones or Bunnicula. In order to ensure that I serve all my students, my library has to be wide-ranging.

Chick 'n' Pug by Jennifer Sattler
Is Your Buffalo Ready for Kindergarten? by Audrey Vernick, illustrated by Daniel Jennewein

Me & You by Genevieve Cote
The Other Dog by Madeleine L'Engle, illustrated by Christine Davenier

My Dog May Be a Genius by Jack Prelutsky
Skit-Scat Raggedy Cat: Ella Fitzgerald by Roxanne Orgill, illustrated by Sean Qualls

And then of course there's the picture books. Why would I be reading picture books if I teach sixth grade? Let me tell you something - there will always be places in your curriculum to use picture books. I used them a lot this year for journal topics and the kids loved it. Don't assume that just because they're older that picture books are babyish. I can almost always find a way to apply the lessons of these books to middle school kids. For example, I just recently read the picture book The Honeybee Man by Lela Nargi and not only does it apply nicely to science, but the writing was so wonderfully vivid and sensory, that I used this book as a lesson in using sensory details in writing. Then, there's also the book One by Kathryn Otoshi. This book was certainly written for younger kids, but the symbolism and message about what it means to be a bystander vs. taking a stand is so powerful that I simply cannot overlook such a teachable moment for junior high students. I think it's a message that's even more important for junior high students to learn - or at least be reinforced. So yes, picture books most certainly have a place in a junior high classroom.

What did you get in your mailbox this week?
at 1:18 PM