Audiobook Month: Not All Audiobooks are Created Equal + Beth's Best Picks for Your Listening Pleasure 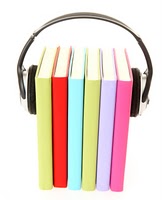 So I missed celebrating audiobook week over at Devourer of Books because it was my last week of school and I was scrambling to get grades in, awards finished, and my classroom cleaned out. Seeing as how the entire month of June is audiobook month, I wanted to write something to recognize all the great audiobooks out there. So often people judge audiobooks by one bad experience and I'm here to tell you - DON'T DO THAT! If you tried an audiobook once and you didn't like it, then chock it up to an ill-suited narrator. I can't tell you how many audiobooks I've abandoned due to poorly chosen narrators.

But what makes a good audiobook? Well, these are my top 5 criteria:


1) The narrator should SOUND like the character he or she is narrating for.
In my mind, a good audiobook narrator SOUNDS like the character they're narrating for. If the book is in first-person and the main character is a twelve-year-old girl, then the narrator needs to have a young-sounding, female voice.  In turn, if the main character is middle-aged, then I don't want to listen to a narrator that sounds eighteen. This seems like a very logical, "well-duh" point, but you'd be surprised at how many audiobook narrators are out there whose voices do not even come close to fitting the age range of the protagonist. That is not to say they don't have a great voice for audiobook narrating; it just means that their voice is the wrong one for that particular book.


2) Narrators need to change their voices to represent different characters.
Again, this sounds like a given, but there are narrators out there who don't do this, or they do it so subtly that it's like they're not even trying. The master of audiobook voices is Jim Dale who narrates for the Harry Potter series, but these narrators do an awesome job as well:

The True Meaning of Smekday by Adam Rex, narrated by Bahni Turpin (my #1 favorite audiobook of ALL TIME!)
The Incorrigible Children of Ashton Place series by Maryrose Wood, narrated by Katherine Kellgren
Going Bovine by Libba Bray, narrated by Erik Davies
The Book Thief by Markus Zusak, narrated by Allan Corduner

3) Show the highs and lows of the book's emotional range
If a character is crying, then well, narrators should sound like they're crying; if the character is laughing, I want to hear some jollity in that person's voice!

These audiobooks have narrators who really put their heart and soul into the story:
Wintergirls by Laurie Halse Anderson, narrated by Jeannie Stith
Delirium by Lauren Oliver, narrated by Sarah Drew
Thirteen Reasons Why by Jay Asher, narrated by Debra Wiseman and Joel Johnstone
Revolution is Not a Dinner Party by Ying Chang Compestine, narrated by Jodi Long
The Devil Wears Prada by Lauren Wiesberger, narrated by Bernadette Dunne

4) Be open to pleasant surprises
Sometimes you expect a narrator to be completely wrong for the part, and you find yourself pleasantly surprised at what a great job the person did. Sahara Special by Esme Raji Codell was narrated by Phylicia Rashad, a very well-established television actress of Cosby Show fame. In this book she was narrating in first-person for an eleven-year-old girl. On paper, it should have been a recipe for disaster. Somehow, she managed to pull it off beautifully.

Other pleasant surprises:
Stargirl by Jerry Spinelli, narrated by John Ritter
Bud, Not Buddy by Christopher Paul Curtis narrated by James Avery (AKA "Uncle Phil" from The Fresh Prince of Bel-Air)


5) Don't assume that full cast productions are going to be great.
Logically, full cast productions sound like they'll all be great because every character is a different actor so its easier to picture characters in your mind. But sometimes they're just awkward and choppy. Most of the time, however, the Full Cast Audio family does a great job at choosing just the right person to fit the character, which is more than I can say for some audiobook companies. Here are a few really good Full Cast productions:

Book of a Thousand Days by Shannon Hale
Sleeping Freshmen Never Lie by David Lubar
Airborn by Kenneth Oppel
The Guernsey Literary and Potato Peel Pie Society by Mary Ann Shaffer and Annie Barrows (This is not technically a Full Cast Audio production, but it does have multiple people narrating for the different characters)

So tell me, what audiobooks did you just love that you would recommend I add to this list?
at 10:38 AM

Email ThisBlogThis!Share to TwitterShare to FacebookShare to Pinterest
Labels: audiobooks