My husband and I recently visited North Carolina for the first time a few weeks ago (yes, I admit, I'm well-traveled in Europe, but not inside my own country) and one of the things I wanted to do while there was experience some authentic, North Carolina barbecue.

My cousin just happens to live in Greenville, which is a stop on the Barbecue Trail. 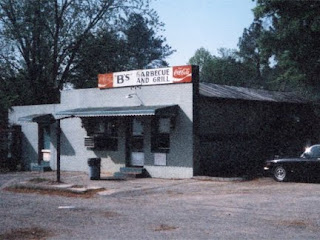 B's Barbecue is the very definition of "hole in the wall." It's a shack, really. But don't let the dilapidated appearance fool you into thinking that the food is poor quality. People line up outside this place for sometimes over an hour to get some of their tasty vittles, and if you hope to order what you want, then you better get there early, because they serve until they run out of food - which is usually 2:00 in the afternoon.

So we arrived at B's a little after 11:00 and waited in line for about 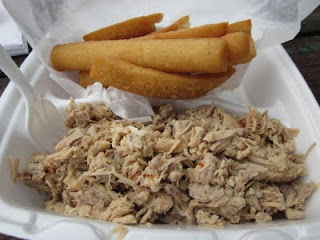 twenty minutes. When we got to the window, we placed our order, and a few minutes later, dove into some of the most delicious pulled pork I have ever eaten. In Eastern North Carolina, their barbecue has a vinegar base to it rather than a tomato-based sauce, and even though I still love tomato-based barbecue, I was excited to have my mind opened to something new and different.

I felt a bit like Anthony Bourdain: eating food out of a building with a less-than-appealing appearance, only to find that its authenticity and tastiness make it way better than anything you could ever order at the chain restaurant down the road.

So take a chance. Go try that hole-in-the-wall place you pass by everyday that you turn your nose up at due to its sketchy appearance. Maybe you'll be pleasantly surprised.

ETA: What are the odds that National Geographic's Intelligent Travel Blog would write a post about the exact same topic on the exact same day?
at 11:53 AM