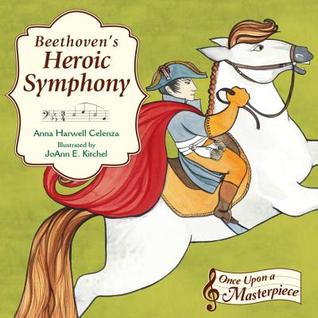 When 19th century classical composer Ludwig van Beethoven discovered that he was going deaf, at first he despaired, for surely his life and livelihood were over. But as he sat at his desk and attempted to write his brothers a letter, a melody filled his ears and wouldn't let go. It was then Beethoven realized that, "My ears might be failing, but music has not abandoned me. If I can imagine music, then I can write it!"

When he began writing the Eroica Symphony (Italian for "Heroic") Beethoven was initially inspired by the leadership of Napoleon Bonaparte whose destiny it was to rid France of their tyrannical king. But when Bonaparte betrayed his people and declared himself emperor of France, Beethoven all but destroyed the symphony he initially called The Bonaparte Symphony.

Thankfully, his friend Ferdinand saved the music and helped Beethoven to see that the symphony was never really about Bonaparte at all and that it was about trying to find the hero in us all.

I enjoyed reading this small snippet into the life of one of my favorite composers. The more I learn about Beethoven, the more I realize he was kind of the bad boy, rock n' roll musician of his day. And that was made even more evident in Beethoven's Heroic Symphony by JoAnn E. Kitchell's illustrations of Beethoven with a mane of wild, spiky black hair. He looks more punk rock than classical composer and I kind of love that.