The Boy in the Black Suit by Jason Reynolds

I liked watching other people deal with the loss of someone, not because I enjoyed seeing them in pain, but because, somehow, it made me feel better knowing that my pain isn't only mine. That my life isn't the only one that's missing something it will never have back.


Matthew Miller is still reeling from the loss of his mother, but now he must deal with his father who is drinking to numb his feelings. To help pay the bills, Matt has been given a job by Mr. Willie Ray, a friend of the family's, at his funeral home. Matt finds working there and attending these strangers' funerals oddly comforting as he continues to navigate his own grief alone.

One day, while working another funeral, Matt meets Lovey. A girl with a strange name, but who appears mature and composed despite the death of the grandmother who raised her. As the two become closer, Matt finds himself both smitten and confounded. Confident and insecure. One thing is for sure though, as Matt grieves over not just the physical loss of his mother, but the emotional loss of his father, he sees what a special connection he shares with Lovey, one that they will eventually discover goes back to their childhood.

Jason Reynold's 2014 debut novel, When I was the Greatest, was one of my favorite books of 2014. It deals with the topics of family, friendship, and community with tenderness and sensitivity. In Jason Reynolds' sophomore YA novel, The Boy in the Black Suit, he tackles the topic of grief with that same gentle sensitivity. Reynolds is a voice in young adult literature that is so desperately needed right now. Reynolds wants readers to see the side of his neighborhood and those like it, and hear from characters that most people don't automatically associate with the words Bed Stuy. (Do a Google search of Bed Stuy and the second thing that pops up under auto-fill is "Bed Stuy crime.")

My one complaint about The Boy in the Black Suit is that it didn't seem long enough. At just over 250 pages, it felt like it needed 50 more pages and could have used some tightened editing because there were a few things left unresolved or unadressed that readers will undoubtedly question. As a voracious reader, I understand that everything doesn't need to be tied up in a neat little bow by the last page, but a mention of the things left unresolved would also make the ending feel more satisfying. Some strands never wove together into a definitive denouement. So when I came to the last page, I thought for sure there was be another chapter, and was surprised when I turned the page and had come to the end.

I am someone who gravitates toward character-driven novels, and that is what Jason Reynolds does best. Matt Miller is a character you want to know. You feel for him. You want to be friends with him. And you want to know how his story ends. Which is why my affection for Matt has left me wanting more.

Even with my dissatisfaction about the way The Boy in the Black Suit ends, Jason Reynolds has quickly become a must-read, no-questions-asked author for me. That has been even further reinforced by his poem-a-day in April on his blog. His poetry is so profound despite its few words. But I already knew that based on the amazing book he co-authored with his friend Jason Griffin called My Name is Jason. Mine Too. Our Story. Our Way, an under-the-radar book that will undoubtedly be getting more attention now that Jason's star is on the rise. I've already got his 2016 novel, Long Way Down, on my Goodreads TBR list despite very little information about it. I am looking forward to reading ALL THE BOOKS from Jason Reynolds. I don't doubt he will have a long and storied career. Because how can you not want to read a book from an author whose bio is this: 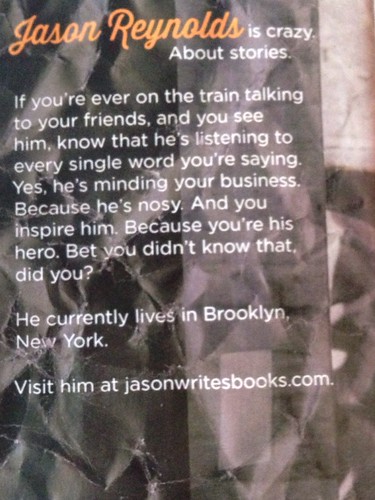