The Cosmobiography of Sun Ra by Chris Raschka 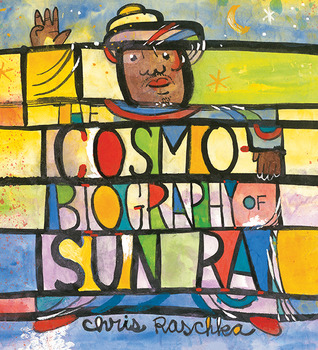 Sun Ra (born Herman Blount) claimed he was from Saturn. Since he was from another planet, the things of earth intrigued him, especially music. But he was also confounded by earthly traditions, such as that of earthlings insisting on "sorting themselves into two varieties: the white variety and the black variety."

Sun Ra was a talented musician who marched to the beat of his own eccentric drum. He was one of the first people to ever play an electric piano, and he released all of his music independently rather than with a record label. Before Sun Ra died on May 30, 1993, he said "You may think that it is gravity that holds us all together but it is not -- it is music."

Chris Raschka's words and illustrations all add to the intrigue of this eccentric musician known as Sun Ra and make you want to learn more about what made this guy tick. My one disappointment is that this book did not come with an accompanying CD to listen to Sun Ra's music. For that reason, I recommend checking this book out from the library while also checking out any and all of Sun Ra's recordings that your library might have. If you've never heard his music before, Raschka will undoubtedly pique your curiosity.

I checked out one CD of Sun Ra's from the library and now I think I might be a little obsessed. It's not as "out there" as I expected to be, but what I love about it is that it's actually music I can listen to and work at the same time. I have never been able to work and listen to music. It's too distracting. Even Mozart, which is is supposed to make you smarter, prevents me from being able to concentrate. To work, I need silence. But strangely, I listened to the whole CD and before I knew it, it was over. I think he might be my new go-to artist to listen to while I work.

If you buy this book or any book through Amazon, it is my hope that you also regularly patronize independent bookstores, which are important centerpieces of thriving communities. While I am an Amazon Affiliate, that by no means implies that I only buy my books through their website. Please make sure you are still helping small, independent bookstores thrive in your community. To locate an independent bookstore near you, visit IndieBound.