The Vegucation of Robin: How Real Food Saved My Life by Robin Quivers 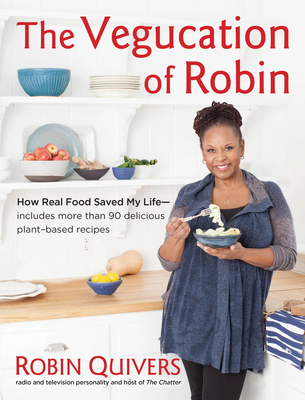 Howard Stern's sidekick of many years and former nurse Robin Quivers is convinced that changing to a vegan lifestyle saved her life. Continuously complaining of aches and pains all throughout her body, Quivers's path to veganism had many twists and turns, but ultimately she discovered that all of her symptoms went away when she eliminated animal products from her diet.

Half of this book is Robin sharing her story of why veganism is such an important lifestyle choice and the other half are the plant-based recipes she shares with her readers. Out of the all celebrity vegan cookbooks out there, I will say that this one has the most appetizing recipes. Dishes like purple potato salad with whole grain mustard, ginger miso kale, and red lentil daal make me actually want to try some of these recipes rather than turn my nose at them. One of the ways Robin entices readers in her recipes is by the cooking techniques she uses to bring out the wonderful flavors of the vegetables such as roasting or grilling.

For the past few years I have been intrigued by the vegetarian and vegan lifestyle, but ultimately food just brings me too much joy to will myself into that sort of diet. However, if I were going to adopt a vegan lifestyle, the recipes in The Vegucation of Robin would probably be the first ones I'd go to. I think what is so appealing about these recipes is that Quivers doesn't use meat replacers like tofu and tempeh for her dishes, but rather, lets the grains and veggies be the star.

While I am a little skeptical of some of Quivers's methods (she would frequently do a 21 day juice cleanse and not eat any food at all), I do respect the choice she made to be on a path to better health. The form of juice cleansing Quivers recommends now is not as extreme as her initial foray into cleanses, but hearing how she wouldn't eat food for weeks at a time made me wonder how much health advice I should be taking from her, former nurse or not.