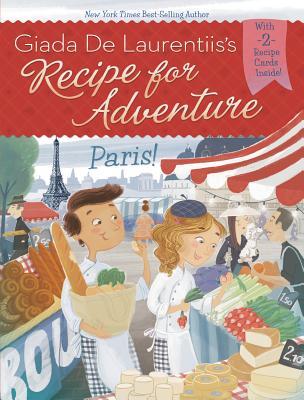 Goodreads summary:
When Zia Donatella comes to live with the Bertolizzi family, little do Alfie and his older sister Emilia know what's in store for them. Zia Dontella is determined to show the kids how a home-cooked meal is better than even the best take-out pizza or burrito. And when Zia's plan actually transports Alfie and Emilia to famous food cities around the world, they learn first-hand how food can not only take you places but can also bring you back home. Alfie and Emilia are transported to Paris, where a case of mistaken identity finds them caught up in the behind the scenes drama at a traditional French cooking school. As they explore the beautiful city of light and try to figure out how to get back home, they meet an incredible cast of French characters, as well as sample some of the best pastries and real hot chocolate that Paris has to offer.


This is the second book in the Recipe for Adventure series, the first one being Naples! While I enjoyed the first book despite feeling that it lacked a clear writing voice, Paris! felt way too much like Laurentiis was trying to create a children's version of The Next Food Network Star with this story. I was especially irritated that the kids were at a cooking school in Paris and without any actual cooking instruction, were asked to create a meal for a famous chef. The kids then prepared and talked of their dishes like they had already received their culinary education. In addition, there was too much talking in platitudes that you often hear Laurentiis, Bobby Flay, and Alton Brown spouting on Food Network Star ("You should never tell your guests the hardships you have to endure to prepare their meals.") and it was written too much like an adult story with children as the characters.

As much as I love Giada and the message she wanted to get across with these books (introducing American children to REAL food rather than the processed crap they're most likely eating every day) the delivery felt heavy-handed and inexperienced. A story like this would have never been published without the celebrity name attached to it.

What I DO like about these books is communicating the idea that food can transport you to a place. I wish that had shone through in the story rather than the heavy-handed platitudes. As of now, I doubt I will be continuing with the series.