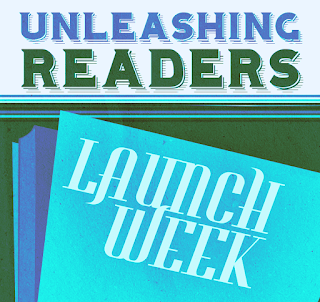 I am thrilled to be a part of this blog hop to celebrate the launch of my friend Kellee and her cohort Ricki's new blog, Unleashing Readers. They have asked me to participate by answering five questions that revolve around the theme of their blog.


What is your favorite read aloud?
I have a couple. The first of course is Wonder by R.J. Palacio. So many kids love and feel an emotional connection to this book. It has such an important message and kids really get attached to Auggie and his friends. The second is When You Reach Me by Rebecca Stead. This book is brilliant for read alouds because it forces kids to pay close attention. They find themselves confused through most of the story, but not so confused that they don't want to try to unmask their confusion. When all is revealed at the end of the story, the looks of revelation on their faces and the discussion that follows is absolutely priceless.

What is your favorite close reading/analysis book?
I recently did a close reading/predicting activity that I took from Kelly Gallagher's book Deeper Reading. The activity was done with the book Bomb: The Race to Build - and Steal - the World's Most Dangerous Weapon by Steve Sheinkin. I gave the kids a list of words from the prologue and then asked them to make a prediction of what the story's about based on the words they were given. Then I gave them the whole text and asked them to mark it up and discuss their thoughts. I had a rather long list of kids who wanted to read the rest book after that activity, which I'd say is a close reading success story!

What is your favorite lit circle book?
Hands down Harry Potter because more often than not, I assign that book to kids who haven't read it because they don't want to read it and most of them end up loving it by the end. In fact, one year I had a kid who was so mad at me for assigning him the book that I thought for sure he was going to go home and make a Mrs. Shaum voodoo doll so he could protrude needles through it. He made it quite known that he was mad at me for giving him that book. Then, a few days before winter break, he came up to me and said, "Mrs. Shaum, if I finish this book before winter break, can I check out the second book to read over break?"  I about fell over in my chair. And by spring break he was already on the fourth book.

That is one of my favorite interactions with a student because I was also dubious about Harry Potter for a long time. I was determined I was never going to read it because I just don't like fantasy (in general). But I was encouraged to listen to the audiobooks by a librarian friend, Allison Tran, and I ended up loving them and finishing the entire series in six months.  I love that when I assign my students this book, many of them end up having the same experience.


What is your favorite book in general?
A year and a half ago I would not have been able to answer this question. I had lots of favorite books. I couldn't narrow it down to just one. But then in January of 2012 I read John Green's The Fault in Our Stars and it completely and utterly stole my heart. It is everything you want from a good book: it's a beautiful love story, it's funny, it's heartbreaking, essentially it makes you feel ALL THE THINGS!