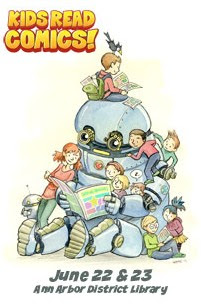 Last year I went to the Kids Read Comics event at the Ann Arbor District Library for the first time and it was great fun. So much fun that when I saw that it was coming back to the Ann Arbor District Library this summer, I decided I just had to go back. It was definitely the right decision because I had even more fun this year than I did last year because I attended more sessions and met even more awesome people who are lovers and creators of comics.

As a teacher, I have only just been immersing myself into the world of graphic novels for the past year or so. I didn't realize how much this genre has become such a pervasive part of the literary world, so to go to an event like Kids Read Comics is not just a fun experience, but it's also a way to further immerse and educate myself about this visual and literary art form.

The first session I went to was a Comics Quickdraw which is essentially like Whose Line is It Anyway meets Win, Lose, or Draw. Teams of four have to draw a four panel-comic and take suggestions from the audience for what they can draw. I went to one Comics Quickdraw on Saturday and another one on Sunday:

Another session I went to was a panel of graphic  novelists and librarians discussing the importance of advocating for graphic novels in libraries, in the classroom, and in children's homes. The panel consisted of Scott Robins, author of A Parent's Guide to the Best Kids' Comics, Jim Ottaviani, author of many graphic novels, his most recent being Primates: The Fearless Science of Jane Goodall, Dian Fossey, and Biruté Galdikas, John Green, author/artist of Teen Boat!, and Rafael Rosado, artist of Giants Beware! The last session I went to was the Kids Comics Revolution podcast with Dave Roman and Jerzy Drozd with guest panelists Scott Robins, Colby Sharp and Brian Wyzlic. The panel was fantastic and essentially carried out the theme of the entire Kids Read Comics event, which is the need to advocate for comics and graphic novels as a legitimate literary art form, in the classroom and at home. The perception that kids can't be learning when they're having fun is something that has perpetuated this idea that graphic novels aren't real literature, but of the graphic novels that I find myself reading these days, many of them are quite literary and have great vocabulary for kids to learn. And especially if they're struggling readers, the artwork can help create a

scaffold for them to learn those words better than they would have if they were just reading a prose novel. Heck, I'm only on page 38 of Giants Beware! and I've already come across these words: vile, valiant, odoriferous, shitake, sentient, vigilant, inclination, and thusly. So this perception that graphic novels are somehow lowbrow and less intelligent than prose novels is completely unfounded. They are developing greatly in their sophistication and authors are really creating some great writing to accompany the artwork. But let me be clear: graphic novels are not just something we should be recommending to struggling readers. We should be recommending them to ALL readers. These books are not something you give to reluctant and struggling readers and then ask them to graduate to prose novels once they've made appropriate progress. These are books for all readers to enjoy.

Speaking of Giants Beware! I had seen the cover of this book a few weeks ago and was immediately drawn to it due to the pug on the cover, as I have two of my own pugs. So when I saw that Rafael was at Kids Read Comics and they were selling copies of it, I just had to buy one. When I told Rafael why I wanted to read Giants Beware! he was gracious enough to draw Valiant the pug in my copy for me: And of course, no Kids Read Comics event would be complete without a picture with one of my favorite graphic novelists, Raina Telgemeier, especially since I was rockin' the Smile t-shirt: After the event, Brian Wyzlic, Scott Robins, Michael Lamore and I went to dinner at The Blue Nile, a fantastic Ethiopian place only a few blocks from the library. I've been to The Blue Nile a couple times before, but for some reason, this time the food was better than usual. Maybe it was just the contentment of getting to meet new friends and talk about books, or maybe the food was really just better than usual. Whatever the case, I highly recommend The Blue Nile if you're ever in Ann Arbor. And if you live within driving distance, I also recommend you come to Kids Read Comics next year!
at 8:43 PM