I'm Michael Symon, and I love meat! No, that is not a confession, but rather a proud proclamation. I'm not sure if it's my Midwestern upbringing or my caveman good looks, but as long as I can remember, my favorite meals have always been built around meat. Whether it's been my grandmother's hearty bolognese - a flavorful sauce of ground beef paired with slightly acidic tomatoes, salty parmesan, and buttery noodles - or a platter of succulent braised chicken thighs and kale topped with crunchy bread crumbs, meat has always managed to bring a smile to my face.

Ever since Michael Symon competed on Next Iron Chef, I have been smitten. I knew before the results were ever announced that he would be the winner. He just had such a zeal for life and infectious laugh that it was - and still is - really hard to dislike him, even when he says things you might disagree with.

I reviewed his first cookbook, Live to Cook, back in 2011, and was incredibly excited over the fact that I actually learned some new things in that book. By that point I was worried that I had exhausted all of my home cook knowledge and that all cookbooks I read were just going to be a regurgitating of all the other recipes I'd ever read in my entire life. With Live to Cook, I not only discovered some new and flavorful recipes, but I also learned a great deal from Symon's teachings and techniques.

I wouldn't say I learned as much from Carnivore, but this book was a great reiteration of Symon's food philosophy, and I appreciate that his focus is and always has been on quality ingredients.

So what is Symon's food philosophy? Well, besides the importance of focusing on ingredients, Symon wants his readers to understand the importance of balance in a dish - the need for a variety of flavors and textures. There's nothing he despises more than a big hunk of meat swimming in a rich sauce only to be served with bland mashed potatoes. That is why whenever you find yourself dining at a Michael Symon restaurant, you will always be served some sort of  bright, acidic component to go along with your big hunk o' meat, as is always the case whenever I dine at his Detroit restaurant, Roast, where, as an example, instead of potatoes to go along with this rich meat dish, it was served with a spicy pickled relish: 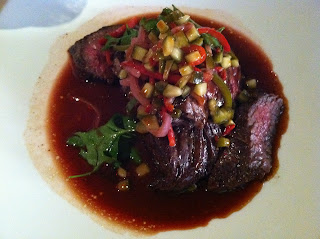 So despite the fact that the meat is obviously the star in this book, equally as important are the sides, which are not your typical mashed potatoes and gravy. Instead you will find bright pops of flavor like a grapefruit salad with feta and kalamata olives, apple and celery root salad, shaved Brussels sprouts served with a vinaigrette, grapefruit tabbouleh, the list goes on, but each side dish is meant to brighten and complement the meat's richness, not compete with it. As Symon says on p. 13:

I strive to counter meat's inherent richness, fattiness, and intenseness (all the things we love about it) with an equal and appropriate measure of acid, salinity, and texture. This formula is what makes a dish a glorious symphony as opposed to a sad one-note song.

But let's talk about the real star, the meat, shall we? This book is divided into chapters thusly:
Pork is definitely the star meat in this book as it has the largest amount of recipes, but since Symon is an unapologetic pork lover, that is not a surprise. Still, even with pork being the star meat in this book, Symon does not skimp on recipes for the other types of meat. I was particularly intrigued by the fact that Symon created a recipe in this book for making your own homemade hotdogs (intrigued, but not particularly compelled to try it any time soon), as well an interesting technique for roasting bone marrow that has me even more curious to try it, even though I'm not sure I would be courageous enough to make it at home (have the butcher cut the marrow bones in half lengthwise so as to allow more of the fat to caramelize which also make them less intimidating to eat).

All in all, this was a wonderfully organized book with beautiful photos and mouth-watering recipes. I initially checked this book out at the library but decided I liked it so much that I needed to own it and purchased my own copy. I have since made three recipes from the book that that were quick and easy and not intimidating in the slightest -- I need to work up the courage for the roasted bone marrow.


While I didn't particularly love the three dishes I made from the book, there were facets of each dish that I enjoyed and found could be made better with some tweaking. For example, I made the orecchiette with chorizo and Swiss chard, which my husband and I found good, but we would have eliminated the cannellini beans because it made the dish too heavy and granular in texture. I also made the apple and celery root salad, which I was excited to try celery root for the first time, but after using it in this dish, I discovered I wasn't a fan of its fibrous texture. I loved the crunch of the granny smith apple in the salad, and while I liked the flavor of the celery root (a milder form of celery), I just couldn't get past the awkward texture. However, I did like the idea of this salad, which would be a perfect accompaniment to a very heavy meat dish, so I would find a way to tweak it a bit in the future: maybe try it with red onion and regular celery instead of celery root.

Despite the fact that the dishes I tried didn't bowl me over, I found them to be a great starting point for tweaking. Symon gave me the tools (focus on balance and quality ingredients), now I just have to use these recipes as a starting point.

Slice the apple and celery root into long, thin matchsticks either by hand or with a mandoline. Put in a nonreactive bowl and toss with the vinegar. Add a large pinch of salt.

In a small bowl, combine shallot and a good pinch of salt. Whisk in the mustard, olive oil, and tarragon. Pour the dressing over the apples and celery root and toss to combine. Let sit for about 20 minutes.