Ever since Michael Symon competed on and won The Next Iron Chef a few years ago, I have been a huge fan - of his cooking, his humor, and his infectious laugh. I admire his unapologetic love for his hometown of Cleveland, Ohio and further love his commitment to his Midwestern roots as evidenced by the choice he made to expand his empire in the downtrodden city of Detroit rather than a foodie hotspot like New York or Las Vegas. A move like that shows he's not just in this business to make money and that gritty places like Cleveland and Detroit that most people disregard and even scoff at are his bread and butter.

I have partaken in two meals at Roast, his Detroit restaurant, and I can tell you that the food is amazing. Just don't consider going if you're a vegetarian. Even salads at Roast are teeming with giant carcasses of meat, as you can see in this "salad" of frisee, crispy pig ear, a poached egg, and giant lardons of bacon that you had to cut through with a steak knife.
So yeah, Symon is clearly a hearty Midwestern boy.

But his cooking philosophy is so much more than just BIG MEAT. What really impressed me about this book is that, given the gargantuan amount of new recipes I try every year and the fact that I know most of the basics of cooking techniques for the home kitchen, this is the first cookbook since I can't remember when that I actually learned something new. You have no idea how much this excited me. I had worried that I had expended all of my learning and that I was doomed to just repeat the same old tired dishes and techniques for the rest of my days.

But alas, Michael Symon came along and shone a light on new and exciting possibilities.

So let me share with you a few tidbits of what I learned in this wonderful compendium of "Symon Says."

First of all, one of the biggest ideas I took away from this book was the need for balance in a dish. Symon says that the main reason dishes fail is not because they taste bad, but because they do not have a balance of flavors and textures. Almost every heavy dish has to have some sort of acid component to try to cut some of that heaviness. This philosopy was made perfectly clear at Roast.


As you can see in this picture, that is a rather large hunk of meat swimming in a rich sauce but to balance out that fatty richness, the dish is then it is topped with a fresh and spicy pickled relish. 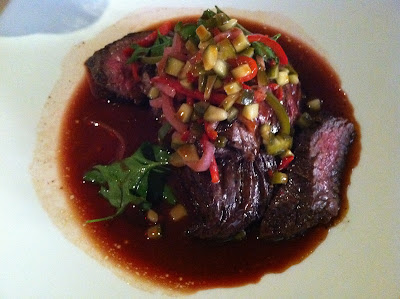 OK, so I've been blathering on about the food at Roast, but what's the cookbook actually like? Are the recipes any good and are they easy to follow is what you're probably asking yourself right about now. The answer is yes and yes. Firstly, I tried his master pickling recipe for onions and will be using it on a regular basis. It is so easy, quick, and perfect for adding that acid component to rich dishes that it's a great have on hand sort of item. In fact, I so loved the pickling recipe that I canned a few jars and gave some to my mother-in-law for her birthday (among other things - I didn't just give her onions!).

And those pickled onions were an extremely important component to the next dish I tried which was the Lola Burger. This is the burger he served at his very first restaurant and continues to put it on the menu at all his other restaurants, including Roast. The first time my husband and I went to Roast he ordered this burger and we ended up trading dishes because it was literally the best burger I'd ever had in my life and the dish I'd ordered was not doing much for me. Since my husband will eat anything, he was gracious enough to switch plates with me.

With the memory of that burger in my mind, I set to work in recreating it in my own kitchen, worried that it wouldn't actually taste as good as it did when I had it at Roast.

But guess what? I needn't have worried about being able to recreate the magic of Roast because it was literally the best burger I've ever made in my entire life.

So what exactly sends this burger into the stratosphere? Well, it goes back to Symon's philosophy of balance. This burger has bacon, cheddar cheese, pickled onions, dill pickle (which I did not include because I don't like dill pickles), spicy ketchup, and A FRIED EGG - all served on an English muffin instead of a bun. With such a wide variety of flavors and textures, you'd almost think that they would all be competing with each other, but that is not the case. Everything was a perfect symbiosis of flavor and texture as preached by the gospel of Symon.

And let me tell you, I was so enamored with this burger that I forgot about my side dish. I made mashed potatoes to go with it and I literally ignored them. You must understand that Beth ignoring a side dish is NOT NORMAL. I generally like the side dish better than the main course. Not this time. This burger was so good that it was the first thing I thought of when I woke up the next morning. Well, actually, my first thought was, "5:30 I hate you!" But after that it was, "Mmmmm.... that was a good burger I had for dinner last night. I wonder if it would be bad to have burgers for dinner two nights in a row."

So if you haven't already figured it out, I absolutely loved Live to Cook. If you are a jaded home cook like me in need of something fresh and new (and you aren't a vegetarian) then seriously consider giving this book a try. There's so much more I could say about it but given the novella length of this post, I'm going to wrap it up.

All I can say is that whatever "Symon Says" I'm buying!