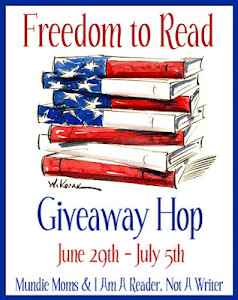 This blog hop is hosted by I Am A Reader, Not A Writer, and Mundie Moms

For my portion of the blog hop, I am giving away a copy of:

Terms of giveaway:
To enter, use the Rafflecopter widget
Must be 13 or older to enter and have a US mailing address

a Rafflecopter giveaway
Don't forget to visit all the other blogs in the hop: