Baconfest Michigan is tonight and I'm skipping lunch to save room

A few weeks ago I purchased tickets to Baconfest Michigan that will be taking place tonight at the Royal Oak Farmer's Market. I almost missed out on the opportunity because their Facebook page mentioned they were almost sold out. I think I was one of the last people to get my hands on a general admission ticket  because one of my friends tried to buy 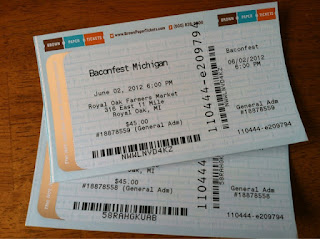 tickets a couple hours later and she was out of luck. Thankfully I WAS able to score two tickets to tonight's event and will be ecstatically feasting on all sorts of porky goodness.

It's no secret that I am a bacon fiend. My students know this. My family knows this. Even my friends on Facebook whom I haven't seen in years know this.

So when I saw the food lineup for tonight's event, I was like a kid on Christmas moring (and this is BEFORE I've actually SEEN any of the food). As someone who is always looking for new and creative ways to add bacon to dishes, this event will be like going to Disney World for me. Here are just a few of the mouth-watering bacon dishes they are offering at tonight's event:


Are you hungry yet? I know I am. Heck, I'm going to skip lunch just to save room for all the bacony goodness I will be partaking in later! Expect a post later this week with a full report on how it went down (that is, if I don't suffer a heart attack first :p)