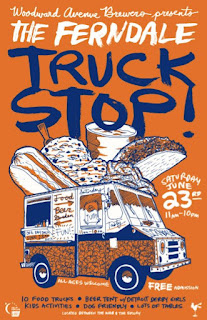 It appears as though Michigan is finally starting to catch on to the food truck trend and last Saturday, in the city of Ferndale, they shut down a section of East Troy right at Woodward and The Woodward Avenue Brewers conducted a "Truck Stop" so to speak. A handful of food trucks were there to sell their wares and wile the crowd with their delicious offerings.

The main reason I wanted to go to this event was simply because I've never experienced the pleasure of food truck cuisine before, which is quickly appealing to accomplished chefs from around the country for the simplicity of being able to move around from place to place and not have to worry about the expenses a brick and mortar restaurant would require of them.

The second reason I wanted to go was that it was advertised on the flyer that the event was dog-friendly. As a pet owner who longs for the pet-friendliness of Europe here in America, I appreciated a poster declaring pets welcome. I mean, I hate to go there, but my dogs are much better behaved in public than a lot of kids are (heck, they're better behaved than I was when I was a kid!). My husband and I like taking them to different places and putting them in different social situations because 1) it tires them out and so they are better behaved at home - where they DO tend to get in trouble. 2) They like people and always relish in the attention they get when they're around a big crowd. Plus, dogs are always a good conversation starter. It's impossible to be anti-social when you have a dog.

So the event was successful to me in two regards: 1) The food was phenomenal and 2) Our dogs had a good time (though, as you will see, they wished we would have shared some of the food with them).

The first food truck where we stopped to eat had a really long line, but it was the one I wanted to try the most, and any time you have a long line of people waiting for food, that's always a good sign. The food truck was called El Guapo - Fresh Mexican Grill and they do a lot of Mexican fusion dishes. Here is a look at the tacos they offer for example: My husband and I ordered three tacos at El Guapo and shared them.We ordered the pork belly confit and the Korean beef While all of the tacos were delicious, I have to tell you how smitten I was with the Korean one in particular. It was just the perfect blend of spicy and sweet with the added fresh crunch of the Asian slaw inside a soft, pillowy tortilla. I still dream about that taco. And Frank is still ticked off with us that we didn't share with him. The second place we went to was Ned's Travelburger. Ned makes his burgers so they're shaped like a sausage and then sticks them in a hot dog bun instead of a hamburger bun to make them easier to eat and also so the condiments can sit alongside the meat and you can get "the best bite in every bite".  The burger I ordered was the TravelPiggy and had ground pork, Dearborn ham, swiss cheese, and pickles. After eating this burger, I have to agree with Ned. A burger shaped like a hot dog is much easier to eat.

By this point, you'd think my husband and I would be full and ready to go home but oh no. We were still hungry. So we went and tried the Taco Mama truck where my husband ordered a Phily cheese steak taco (YUM!) and I ordered some chorizo rice (Double YUM!) Again, Frank and Guenter really wished we would have shared our bounty with them As if all that food we just consumed wasn't enough, we couldn't leave without stopping by the local ice cream place, Treat Dreams, that makes probably the best (and most unusual) ice cream in the metro Detroit area. I ordered an ice cream sandwich with lemon basil ice cream between two sugar cookies. Oh Heavens. To say that was way better than any chocolate and vanilla ice cream sandwich you buy from the freezer case at the grocery store is an understatement.
More cute pugness: wishing they could have some ice cream Despite the fact that they didn't get to sample any of the food, the pugs basked in the glow of all the attention they received from doting dog-lovers. When we finally left, they immediately crashed in the car, tired and happy from their evening of people (and food) watching. I hope more events in the future advertise dog-friendliness. When well behaved, they bring such happiness to the people around them. Maybe it's just me, but I think it's impossible to be unhappy when you're around a dog.
at 11:05 AM