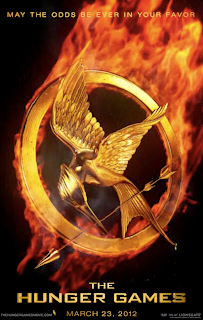 Attention: This review contains major book spoilers. Read at your own peril if you haven't read the books yet.

I wasn't going to write about The Hunger Games movie. I didn't want to be just another person in the blogosphere to add my two cents to an otherwise oversaturated commentary.

But then I saw the movie. And I couldn't NOT comment.

I sat there in the theater for two and a half hours today completely spellbound, more than half of the time in tears or on the verge of tears. It was such an emotional experience to see the world that Suzanne Collins created come to life. Sometimes when we imagine a world in our heads from a book we read, it can still be a bit incomplete and hazy, so when books become movies we rely on the movies to try to fill in the blanks for us. Sometimes they succeed, sometimes they don't.

I'd have to say The Hunger Games succeeded beyond my wildest expectations. One place where movie producers filled in the gaps for me was how they envisioned The Capitol. What a lavish and wickedly wacky world they imagined, and while completely different from what I pictured in my head, it somehow fit perfectly with the story.

But let's go back to the beginning with The Reaping. Before Effie Trinket announces the names of the Tributes, she queues up a film that President Snow narrates to explain the purpose of the Hunger Games. It immediately puts you in mind of one of those old Soviet propaganda films - displaying bronzed, muscled tributes, willing to risk life and limb for "the greater good." But here is where the visual of the movie over the book was beneficial. The contrast between the proud, regal tributes in the propaganda film and the stunned, frightened citizens of District 12 was jarring, made even more symbolic by the striking camera angles that bounce back and forth between propaganda and reality.

Then there's the emotion of the results of The Reaping. Katniss most definitely steals the show with her dramatic response to Prim being selected as Tribute - we all saw that in the trailer. But what we didn't see was Peeta's reaction to his selection as tribute and while definitely not as dramatic, it is equally as emotional.

Since we're talking about emotion, let's discuss the actors. While I was quite dubious about almost every casting choice, now that I have seen the movie in its entirety, I can't imagine anyone else playing those roles. I'm still a little iffy about Peeta, but I think he nailed the likability factor. There was no swooning for me over Peeta in this movie. I've always been a Gale fan from the beginning and the movie just reinforced that position. Just as in the book, I never bought into the romance between Peeta and Katniss. It always felt like it was just a ruse to her in order to survive.

Which leads me to Jennifer Lawrence as Katniss. She nailed the calculating and emotionless when she needed to and the moving and dramatic at other times. I'd have to say that Rue's death is even more devastating in the movie than the book for the simple fact that Lawrence's reaction to it is so powerful and convincing.

Woody Harrelson as Haymitch I thought was a great choice. The character seemed to be much more with it in the movie vs. the book and was definitely less of a drunkard on screen, but Harrelson still manages to make the role work for the movie and given more time, would have explored his major vice a bit more, but with time constraints, I'm sure that was something they had to sacrifice.

One of my favorite casting choices was Lenny Kravitz as Cinna. OK, can I just say that I can't believe that man is almost forty-eight years old? He doesn't look a day over thirty-five. Cinna's integrity and gentle-nature was definitely given its proper due in Kravitz's portrayal. He along with Gale were two characters I wanted to see more of in the film.

And Elizabeth Banks as Effie Trinket? Delightfully uncomfortable and wickedly hideous - and I mean that in the best possible way. Maybe I just don't remember well enough from the book but Effie in the movie seemed much more like a pawn of the Capitol than she did in the book. Perhaps I'm just misremembering though. Where Cinna definitely had a "stick it to the man" kind of vibe, Effie felt more like she thought the whole thing was just a big pageant instead of a fight to the death.

As Kimberly over at Stacked mentioned, one thing they added to the film that I really enjoyed was seeing the "behind the scenes" work of the gamemakers and the calculating orchestration of the games by Seneca and President Snow. Because Katniss narrates the entire book, we don't get to see what's happening from the perspective of other characters so that was a different experience from the book and one that I think enhanced the story.

The last piece of the movie that I wanted to comment on was a discussion a few of us were having on Twitter about the handheld camera work. Lenore Applehans mentioned that the frequency of shaky camera work left her with a headache and feeling nauseous. As someone who experienced this very thing a few years ago when my husband and I saw The Bourne Ultimatum in theaters, I worried that I would come out of the movie feeling the same way, or worse, having to leave in the middle. Thankfully, this did not affect me in the slightest, and in a way I was grateful for the shaky camera work as it made the violence much less gory.

Overall, I'd have to say this is one of the most amazing book to film adaptations I've ever seen. And since Suzanne Collins's name appeared quite a few times in the credits, I'm going to be so bold to say that including the author in making a book come to life on screen almost always is a wise decision.

Despite the fact that I didn't love the other two books in the series as much as I loved the first one, the creation of this blockbuster phenomenon has made me buy into the whole experience and made me even more emotionally invested than I was when I read the books. And listening to all the sniffling, snorting adults, teens, and tweens sitting in the theater today, I could tell they all felt the same way too. The way that they ended the first movie was a perfect set up for the second one and made me ever more anxious for next year.
at 8:56 PM

Email ThisBlogThis!Share to TwitterShare to FacebookShare to Pinterest
Labels: book vs. movie, dystopian, the hunger games