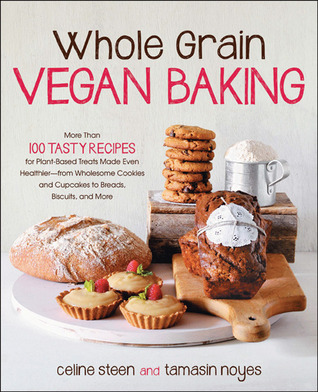 In seeking relief from my IBS and at the request of my doctor, this summer I underwent some elimination from my diet, starting with dairy. Now anyone who knows me knows how much I love cheese and ice cream, so my two weeks of no dairy was pretty rough.

During that time, I came across Whole Grain Vegan Baking at the library and decided to give some of the recipes a try. I admit, the IDEA of being vegan is better than the actual carrying out of such a lifestyle. I have no willpower when it comes to that sort of thing. But books like Whole Grain Vegan Baking make the carrying out part a little less intimidating (though I have no plans to become vegan in the near future, I am still looking for more vegetarian/vegan recipes to make my animal product footprint less significant).

The recipes, pictures, and ingredients used in this book not only make these baked goods sound acceptable, but they even kinda sorta sound delicious too. I tried two recipes from this book, one was a hit and one was a miss, but the hit got me thinking that I will continue to attempt more vegan baking in the future.

The layout of Whole Grain Vegan Baking is very simple, attractive, and organized well. I'd say if you're thinking of giving vegan baking a go, this book would be a good place to start.

The following recipe was so good, I'm planning on making it one of my go-to baking recipes, not just vegan baking, but baking in general. The inclusion of the Sriacha and Chinese five-spice powder gives this cookie such a unique flavor and spicy undertone.

I modified this recipe by not using oat flour (I substituted the oat flour for all amaranth -- well, I did also use the whole wheat flour) and instead of peanut butter I used almond butter. Based on the picture in the cookbook, my cookies had a different texture (more chewy and cakey than crumbly), but they still came out delicious.

If you're looking to adopt a vegan lifestyle or you're like me and you want to lessen your animal product footprint, or heck, you just like baking and want to try something different, I highly recommend Whole Grain Vegan Baking. This cookbook went from trying it by checking it out at the library to owning my own copy.

Combine peanut butter, sugar, oil, maple syrup, vanilla, and Sriacha in a medium bowl. Stir together with a wooden spoon until thoroughly combined.

Scoop the dough into tablespoon-sized mounds and press down slightly.

Bake cookies 15-17 minutes or until the bottoms are browned. Let cool for 15 minutes on the baking sheet because the cookies might break if moved too soon.