Food other than turkey that will make you feel thankful: MANI Osteria & Bar in Ann Arbor

Nowhere in southeastern Michigan is there a better place to try new restaurants than Ann Arbor. For those of you  reading my blog who aren't from the Midwest, you might not already know that Ann Arbor is a college town - The University of Michigan proudly resides here - and its penchant for variety and sophistication is fairly well known in food circles. Since my husband and I live only about ten miles from A2, we frequently find ourselves wandering downtown Ann Arbor, looking for a new restaurant to try.

Last night, we found ourselves wandering into MANI Osteria & Bar. It was one of those moments where you have to be grateful that there is such a thing as serendipity. I had read some things about MANI on UrbanSpoon, but we did not seek it out last night. It just kind of fell in our lap.

When we walked in the door and arrived at the hostess station, we were offered a seat at the chef's bar where we could watch the food being prepared as we ate. For a foodie such as myself, this was like watching dinner theater - but WAY more entertaining. I was so impressed with the ballet of food preparation and organization going on the kitchen that I daydreamed of one day being able to cook without making my kitchen a disaster area as these professionals so beautifully displayed.

After perusing the petite menu, we ordered two antipasti: aranchini (risotto croquettes) and crispy pork belly smothered in apricot marmelata. To tell you the crispy pork belly was a religious experience would only be a slightly a hyperbolic statement. It was like eating superbacon. (If you read my blog regularly, you already know my close relationship with bacon.) It took the very best part of bacon: the salty, crispy goodness, and elevated it to a new level with the meaty chew of a steak. I wish I had taken a picture of this dish before I gobbled it down. But I ate it too fast before I even thought that I should've had my iPhone handy.

For dinner I ordered arugula and prosciutto pizza with scamorza, olive oil, and sea salt. While the pizza was not nearly as luscious as the crispy pork belly, I was especially smitten with how they served it. Instead of buying fancy, elevated pizza plates like most red-checkered table pizzerias, MANI decided to take reduce, REUSE, recycle to a whole new level and serve their pizzas atop giant empty cans of tomatoes. 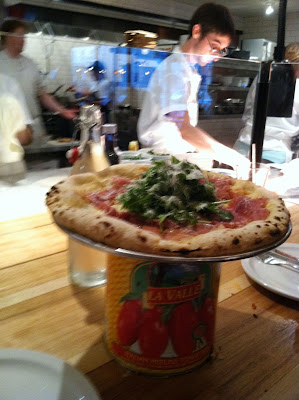 Not only does this show patrons their commitment to reducing wastefulness, but it also gives customers yet another glimpse into the ingredients they use in their dishes. With more people these days demanding to know where their food comes from, this is really a simple, yet ingenious move on their part.

As I sat there savoring every bite of my meal and sipping on a glass of perfectly spiced sangria, I  couldn't help but stop and think how I really want for nothing in my life. I have a wonderful husband, a job I love, and a roof over my head. What more could anyone ask for? And the fact that a meal at a trendy downtown Ann Arbor restaurant could make me contemplate all the things I'm thankful for, just shows you how darn good their food really is.

Sophistication just oozes out of the walls of this restaurant, and yet there is still a casualness about it that prevents it from being pretentious. The simple, sleek decor, along with the giant windows that display the bustling downtown Ann Arbor scene make the space feel urban and trendy. 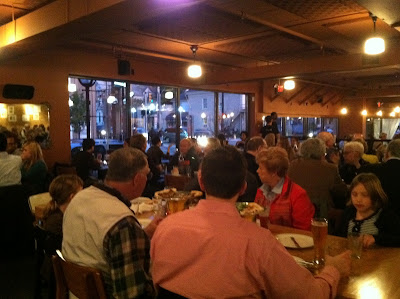 Urban and trendy, however, can be two words that spell disaster for a restaurant if the food is not up to snuff. Since MANI only recently opened in May of 2011, it remains to be seen whether this restaurant will be a long-standing Ann Arbor institution, but given their manageable and delectable menu along with chefs and an owner who show a commitment to simple Italian food with quality ingredients, it is my hope that this place stays around for a very long time.

I don't often fill out comment cards at restaurants, but this meal compelled me to do so. While the food at MANI is on the pricey side so it's not a restaurant we would visit regularly, I can assure you that we will be returning - hopefully for years to come.
If you ever find yourself wandering downtown Ann Arbor, you can take the serendipity route like we did, or you can seek out this eatery with attentive service and gratitude-inducing food.