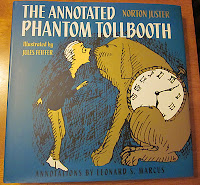 The Annotated Phantom Tollbooth by Norton Juster
The Phantom Tollbooth is one of my favorite books of all time. With the 50th anniversary of this children's classic, they created two new editions this year. I bought the annotated version because I love the idea of learning all of the secrets of how this book was created.


This was an EPIC book week at the used book store. Look at all of these books I got - for only $12 total. 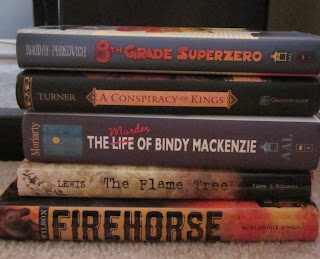 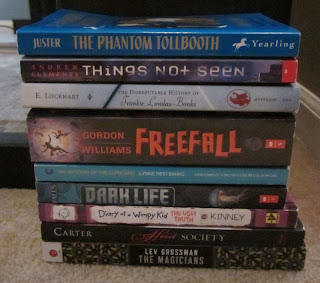 The Magicians by Lev Grossman
Heist Society by Ally Carter
Diary of a Wimpy Kid: The Ugly Truth by Jeff Kinney
Dark Life by Kat Falls
The Mystery of the Cupboard by Lynne Reid Banks
Freefall by Roderick Gordon and Brian Williams
The Disreputable History of Frankie Landau-Banks by E. Lockhart
Things Not Seen by Andrew Clements
The Phantom Tollbooth by Norton Juster 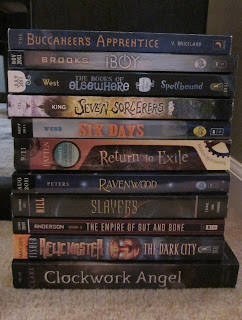 Clockwork Angel: The Infernal Devices by Cassandra Clare
Relic Master: The Dark City by Catherine Fisher
The Empire of Gut and Bone by M.T. Anderson
Slayers by C.J. Hill
Ravenwood by Andrew Peters
The Hunter Chronicles: Return to Exile by E.J. Patten
Six Days by Phillip Webb
Seven Sorcerers by Caro King
The Books of Elsewhere: Spellbound by Jacqueline West
iBoy by Kevin Brooks
The Buccaneer's Apprentice by V. Briceland

And this one was so epic and I was so spellbound that I found it at the used bookstore that my eyes literally bulged out of my eyes, so it deserves its own picture: 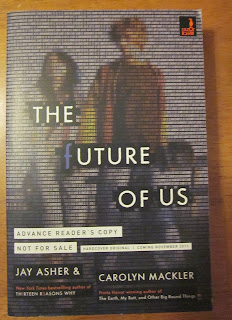 The Future of Us by Jay Asher and Caroyln Mackler

So I understand the questionable nature of purchasing ARCs. I get that there's an ethics issue to someone selling them. But my library sells used books that people donate. It's not like the person donating them made any money on them. My library sells these books for 50 cents a piece (or less). The way I look at it is, if I had won those ARCs in a contest, shipping would have cost more than what I bought them for.  And now these books have found a good home in my classroom for my students to enjoy. When I brought these books into my classroom and showed them to my students, they were so incredibly excited. If I'm a bad person for buying them for my students, then oh well. I'll accept that.

What did you get in your mailbox this week?
at 9:42 PM