One of my favorite foods in the world is bacon. I briefly toyed with the idea of becoming a vegetarian about a year ago but bacon is one of the things that breaks my will to go meatless.

In addition to loving bacon, some of you might know that I have a penchant for unusual ice cream flavors (olive oil, honey lavender, green tea, and basil being some that I've tried already).

You see where I'm going with this...

Before the start of the summer, I had this flash of brilliance for a new ice cream flavor: maple bacon! I kept this idea in the back of my head but never got around to actually trying to come up with a recipe. But then I didn't have to. Claire Robinson, that lovely southern belle of 5 Ingredient Fix fame, stole my idea and came up with her own recipe for maple bacon ice cream.

I will forgive Claire for her transgression because she saved me from many egregious mistakes I was bound to make in attempting a feat such as how to incorporate bacon into an ice cream base while still keeping it crispy. I mean, who wants soggy bacon? Certainly not me!

So yeah, needless to say, I just used Claire's recipe rather than creating my own and I tell you what, it was AMAZING!

Let me take you on my journey of maple bacon ice cream creation.
(Adapted from Claire Robinson)

1. In a small saucepan, over moderate heat, reduce maple syrup by half.

2. In a medium saucepan, over moderate heat, combine half-and-half along with 1/2 cup sugar until hot and just bubbling around the edges.

4. Pour whole egg mixture back in saucepan and cook over medium heat, stirring constantly until mixture coats the back of the spoon.

5. Pour mixture through sieve to get rid of any bits of egg yolk that solidified, then whisk in maple syrup.

6. Cover with parchment paper to prevent a skin from forming and then chill in the fridge for at least 6 hours.

8. Line a sheet pan with foil then top it with a baking rack. Place bacon strips on top and bake until crispy (15-20 min). When cool enough to handle, finely chop.


9. Line another sheet pan with parchment paper and set aside.

Now comes the fun part:
10. Place the remaining 1/2 cup sugar in a saucepan over medium heat, stirring until sugar starts to melt. 11. Stop stirring and cook until the sugar is a golden caramel color. 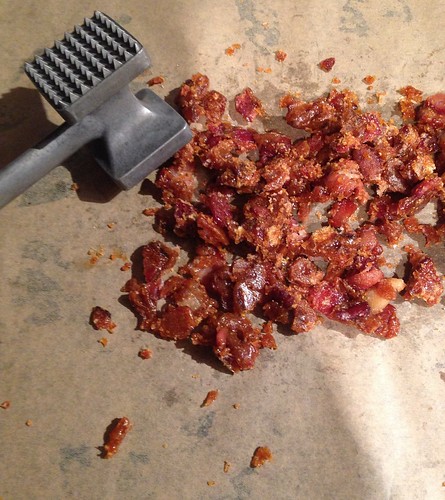 14. Freeze custard in an ice cream maker according to manufacturer instructions, about 30 minutes. At the last minute, add in the candied bacon and let churn until just combined. Freeze in an airtight container.

Then behold the maple-bacony goodness upon that first scoop. If you want to be extra froufy, serve in a martini glass In fact, this post is making me hungry for some more. Off to eat three more scoops...