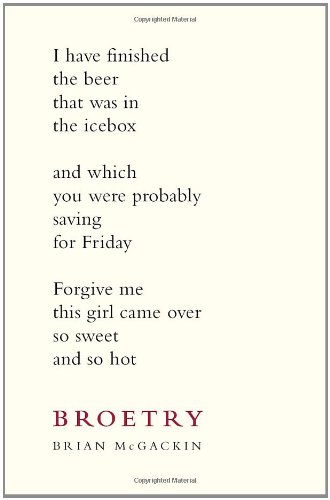 Broet Laureate Brian McGackin has created this side-splitting book aptly titled Broetry, for the men in the world who - I'm not going to pull any punches here - are not cultured in the finer things in life (though I guess what constitutes "finer" completely depends on who you talk to). Rather than reading poems about love and butterflies or Stopping by Woods on a Snowy Evening, McGackin tackles topics like Star Wars, crazy stalker girlfriends, why guys cheat, cougars, and even Steve Guttenberg.

What McGackin was trying to accomplish in Broetry was to show that poetry can be relateable to guys. As he says in the intro:

This is pretty much the exact thing I have been telling my students every year when we start studying poetry extensively (though this book is definitely NOT appropriate for my students, who are sixth graders). The students who say they don't like poetry only hate it because they haven't found poems in a topic they can relate to. Brian McGackin has filled a niche that has pretty much gone unfilled since the beginning of time, unless you count dirty limericks.

But does taking an uncultured, non-literary population of males and turning their interests into poetry automatically make it literary? No, but I don't think that was Brian McGackin's goal anyway. Broetry is kind of like the gateway drug. Oh, you like these poems? Well, why don't you try your stab at some of these Billy Collins poems? Or Langston Hughes? Or William Carlos Williams? Perhaps they'll never fully appreciate Emily Dickinson, but hey, it's a start.

The language in Broetry is crass, obscene, and almost banal in its simplicity, but what it lacks in beautiful turn of phrase, it makes up for in clever play-on-words, hilarious titles, and unexpected topics. This book would make an amazing Christmas stocking stuffer for that "guy's guy" in your life who has always looked his nose down at poetry unless it starts with the line "There once was a man from Nantucket..."

P.S. If you don't recognize the poem on the front cover, please do me a favor, culture yourself and look up "This is Just to Say" by William Carlos Williams. What's on the cover is a lot more amusing once you know it was "inspired by" by an actual celebrated American poet.
at 8:25 PM