The Soul of a New Cuisine: A Discovery of the Foods and Flavors of Africa by Marcus Samuelsson

Executive chef at Aquavit in NYC, Marcus Samuelsson is a bit of an enigma.  He was born in Ethiopia but raised in Sweden.  Clearly his dark hair and dark skin stood out in the land of blond hair and fair skin, but he had a loving adopted family and was raised a true Swede. For a long time he didn't know much about the continent of his birth and decided he needed to remedy that.  This book was a journey for him to learn about the cuisine of his homeland. Despite being a cookbook, it's really a love story to his heritage.  The pictures and colors are stunning and the recipes show a vast diversity in the cuisine which most people assume is very one-dimensional.

This is a wonderful book to introduce outsiders to the diversity of African Cuisine, which most people assume is not very diverse at all. The recipes, however, did not leave me very inspired to try them in my own kitchen. The only recipe out of the 204 included that I actually attempted was the sesame cookies.

I baked a batch this morning and I have to say I was quite pleased with the flavor.  They are basically a sugar cookie with a whole cup of sesame seeds added into the dough.  The first taste you get is the sweetness from the sugar, but then you get the earthiness from the sesame seeds which makes for an interesting dichotomy of flavors. Given the success of this recipe, I might go ahead and try some others. 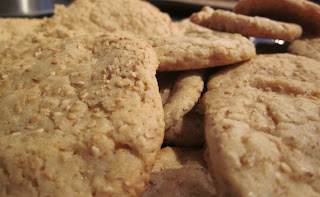 Combine the flour, baking powder, and salt in a small bowl.  Set aside.

Using an electric stand mixer, cream the butter and sugar in a large bowl until light and fluffy.  Add the egg, vanilla, and lemon juice and beat thoroughly. On low speed, slowly add the flour mixture and mix until just incorporated. Beat in the sesame seeds.  Allow the dough to rest, covered, in the refrigerator for 1 hour.

Preheat oven to 350. Line two baking sheets with parchment paper and grease parchment.  Drop the dough by heaping teaspoons onto the baking sheets leaving about 1 & 1/2 inches between cookies.

Bake until golden, about 7-10 minutes (the original recipe calls for 5-7 but that was not nearly enough time), turning the baking sheets around midway through baking.  Remove from baking sheets and cool on a wire rack. 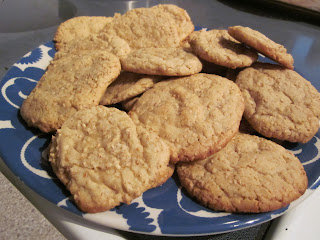 The Soul of a New Cuisine: A Discovery of the Foods and Flavors of Africa by Marcus Samuelsson
Published: September 2006 by Wiley
Pages: 368
Genre: Cookery
Audience: Adults