Of Fire, Ice, and Olive Oil

Two summers ago my husband and I visited New York City where we dined at Otto, one of Mario Batali's many restaurants. While just a mere pizzeria, a year and a half later I'm still talking about what an amazing meal we had at this restaurant. One of the reasons for my love of all things Batali was that it was there I tried olive oil gelato for the first time. When first met with the phrase "olive oil gelato" our first instinct is to recoil in disgust at the very thought of an ice cream tasting like olive oil. I am here, however, to tell you that it is one of the most wonderful surprises your mouth will ever experience.

Last year for my birthday my husband bought me an ice cream maker so I could try relive our dessert experience at Otto. While certainly not as perfect as our olive oil gelato initiation we experienced in New York City, I have managed to amaze and astound many of my friends and family who initially believed that olive oil ice cream would taste repulsive.

This weekend my husband and I attended a birthday party of one of those friends who first thought she would hate olive oil ice cream and is now telling everyone she knows just how amazing it truly is. So I decided that her birthday present should be a vat of olive oil ice cream. 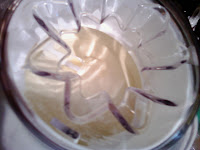 After I made the custard, I realized that I had a little bit too much for the freezing canister so I decided to try a little experiment. If olive oil flavor is good as a dessert, how would it taste a creme brulee? 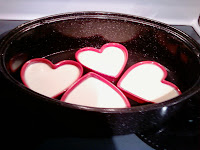 So I dusted off the ramekins in my cupboard, prepared a water bath, and cooked the custard for an hour on 300 degrees. After chilling the the refrigerator over night, I busted out the torch and helped myself to one of these bad boys for lunch this afternoon.

Even though the custard didn't completely set, I have to say that the subtle olive oil flavor was almost more enjoyable than a traditional vanilla creme brulee. And of course, who can resist that very first crack into the hard, caramelized exterior? 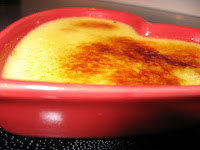 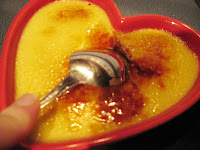 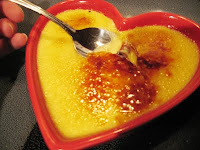 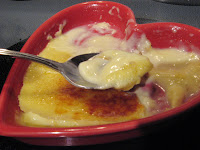 I definitely will be making this dessert again. 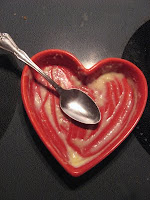