Flight 253 and the Continuing Demise of Airline Travel 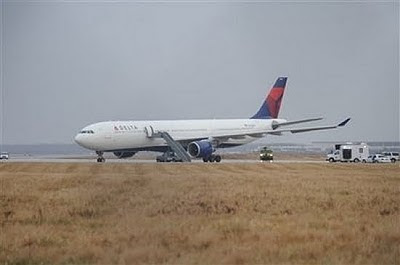 I have had CNN on nonstop since Friday evening. I just can't get enough information about this whole terrorist plot that was thwarted by passengers and faulty explosives. Another reason I can't stop watching is that it happened in my own backyard. Detroit Metropolitan Airport is but ten minutes from my house and I have even taken flight 253 (labeled flight 53 before Delta acquired Northwest) a time or two when my husband and I lived in Germany and would fly home to visit family.

What disturbs me the most about this whole situation, however, is not that Umar Farouk Abdulmutallab was able to board the plane with these explosives (though that obviously disturbs me a great deal). No, what troubles me the most is the knee-jerk reaction that the TSA chose to implement immediately following the foiled plot. Passengers were quickly ordered to remain seated for the final hour of flight, not permitted to get up to use the restroom, retrieve items from their carry on luggage, or even use a blanket and pillow.

I find this type of reaction counter-productive. Future terrorists will not be looking to repeat this same plot; they will be looking to try something different. And by requiring passengers to remain completely still, denying them the simple right of using the restroom, what exactly is that helping? All it will do is cause the future Abdulmutallabs of the world to go into the restroom TWO HOURS before the flight lands instead of one.

I honestly don't know what the answer to this dilemma is. Body scanners are clearly a breach of privacy with most people, but the minutia of these regulations is merely calling out a challenge to the future terrorists of the world. All I know is that treating every person on board an 8-hour flight across the ocean as if they're criminals is not the answer. That was clearly proven two days later when, on December 27th, the exact same flight from Amsterdam was interrupted by another Nigerian man, this time completely harmless, because he was legitimately ill and needed to use the restroom with great frequency. When I first heard about the December 27th story, I immediately thought it was due to the ridiculous TSA restrictions and not because the man was a terrorist.

As someone who loves to travel, if these restrictions continue, I don't know how often I'm going to be boarding an airplane in the future. I already had a very negative experience with TSA returning home from Vancouver this summer when they confiscated my boarding pass and passport for 15 minutes while they questioned me and patted me down THREE TIMES because they detected a substance on my laptop that is sometimes found in explosives (but is also used in perfumes). It was one of the most traumatic and humiliating travel experiences I've ever had, and one that I don't wish to relive again. So what I want to know is why I was exposed to scrutiny while Mr. Abdulmutallab was allowed to just pass right on through?
at 2:22 PM