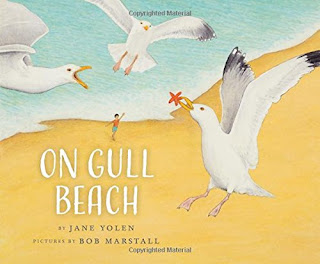 Welcome to Day #4 of the On Gull Beach Blog Tour!

To celebrate the release of On Gull Beach by Jane Yolen and illustrated by Bob Marstall on March 27th, blogs across the web are featuring a scavenger hunt interview with Jane, plus 10 chances to win a set of On Bird Hill, On Duck Pond, and On Gull Beach! Follow along each day to see a new answer or poem from Jane!

This happened to me in Scotland where I spend my summers. Really.

Goodbye to the Gulls

For two weeks, down the flue,
from their nest on the chimney pots,
the black-backed gulls cackled and called,
spitting out bird words—food, flight, danger.
When the baby slipped down the slant
of the canted roof and landed in the patio,
All fluff and legs, screaming for food,
his beak wide open for hours at a time,
I thought I’d go mad with the noise.
Yet for three long weeks I fed him,
named him George or possibly Georgette,
with baby gulls it’s hard to tell.
I ducked when Mama Gull dived down at me,
crying out danger, food, flight, all of the above.
For three long weeks I watched over George
feeding him crackers., cooked chicken, bread.
He always demanded more, in that insistent
creak of a voice., and well-trained, I supplied it.
Four days ago, fully fledged, he flew
over the garden hedge, into the town
where gulls scream all day and all night long,
and the residents complain, their voices
louder, trilling their Scottish r’s
like kettles on the boil.
As for me, strangely, I miss the gulls
who all flew off after George,
carrying their cacophony with them.
The silence is worse than the cries.

Together again! On Gull Beach reunites bestselling children’s author Jane Yolen and award-winning illustrator Bob Marstall for the third installment of the acclaimed On Bird Hill and Beyond series of children’s books written for the renowned Cornell Lab of Ornithology.

In On Bird Hill, Yolen and Marstall took readers on a surreal journey with a boy and his dog as they see the natural world, ultimately witnessing the miracle of a chick emerging from an egg.

On Duck Pond continued their journey, this time at a serene pond filled with birds, frogs, and turtles who are suddenly disrupted by their intrusion, but soon settle back into a quiet equilibrium. On Gull Beach brings us to an idyllic shoreline in Cape Cod, where gulls hover, dive, and chase with pitched acrobatics in pursuit of a seastar. This enchanting sequel in a brand new habitat will delight readers young and old.

About the Author: Jane Yolen has authored more than 370 books, including the Caldecott-winning Owl Moon, which every budding young ornithologist owns, You Nest Here With Me, which is a popular new favorite, and the New York Times bestselling series How Do Dinosaurs. Jane Yolen’s books have been translated into over 20 languages and are popular around the world. Jane's husband, David Stemple, was both a well known bird recordist and a professor of computer science and he taught the entire family how to identify birds. Many of Jane’s books are about wildlife subjects, especially the winged kind. Jane lives in Easthampton, MA. Visit her online at janeyolen.com.

About the Illustrator: Bob Marstall is the illustrator of nine nonfiction children’s books, including the The Lady and the Spider, which sold over a quarter-of-a-million copies and was a Reading Rainbow selection. Bob has also been honored with an ALA Notable; an IRA Teachers’ Choice; a Smithsonian Magazine Notable Book for Children; and three John Burroughs selections.

In addition, two of Bob’s books are included in the New York Times Parent’s Guide’s “1001 Best Books of the Twentieth Century.” Bob Lives in Easthamton, MA. Visit him online at bobmartsall.com.

About the Cornell Lab: The Cornell Lab of Ornithology is a world leader in the study, appreciation, and conservation of birds. Our hallmarks are scientific excellence and technological innovation to advance the understanding of nature and to engage people of all ages in learning about birds and protecting the planet. birds.cornell.edu