Blog Tour: Emily and the Spellstone by Michael Rubens 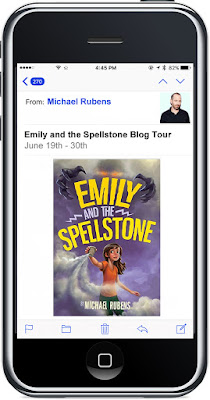 
Top Three Tasks for My Demon

Imagine you were in control of a powerful supernatural being that had to obey you. What would you have it do? That’s one of the many questions the heroine in Emily and the Spellstone has to deal with. Emily finds herself the master of an unwanted demon-like servant named Gorgo (unwanted for several reasons, including the fact that he keeps cheerfully reminding her that he intends to eat her as soon as he figures out a way to free himself). But in the meantime, he is indeed bound to her service and has to obey her: “I’d prefer if you’d just think of me as an immortal creature of malignant intent with powers that you can’t even imagine. Who can bench-press a lot.” He flexed. Emily believed him. “And you have to obey me?” said Emily. “Yes! Until such time as I’m freed by some trick or power, at which point I will consume you! But until then I have to serve you.” “How?” “What do you mean, how? However. Do you have enemy armies that need smiting? Castle walls destroyed and the habitations put to flame? A mountain moved?”

Emily doesn’t have a need for any such services, and nor do it. But if I did have such a servant, here are three things I’d have him do: 1. Clean the apartment. Like, a really thorough cleaning, lifting up all the furniture, scrubbing the walls and ceiling, taking a brush to all the grout between the bathroom tiles. Oh, I’d also have him do the laundry. This may sound like a boring, unimaginative assignment to you – after all, this creature could literally move mountains – but I think I’d rather have a really clean floor without having to do it myself. 2. Ride him to school. This one actually comes from my ten-year-old daughter. When I asked how she thought other people might react if they saw her getting a piggy-back ride from a giant demon-like creature, she agreed that might cause some problems, but also noted that we live in Brooklyn and the inhabitants are pretty used to seeing weird stuff. 3. Speaking of living in Brooklyn, I would have him sit on the stoop at night, waiting for horn-honkers, loud-music-players, and motorcycle-revers, at which point he would approach them and very politely and very cheerfully -- but very firmly -- request that they keep it down.
*****
Stop by Positively Book Crazy tomorrow for day #5 the tour! 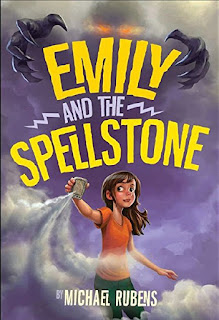 Emily picks up a stone that looks like a cell phone but has unexpected magical powers. It's a Spellstone! Now that she has become an unwilling Stonemaster—one who wields the power of the Stone—she has to figure out Spellstone technology fast if she is to survive a hair-raising adventure among giant dogs, demons, clones, mean girls, and deeply wicked people who want the Stone. A witty tale of a quiet girl who discovers she's a hero when she needs to be. Stonemasters rule! 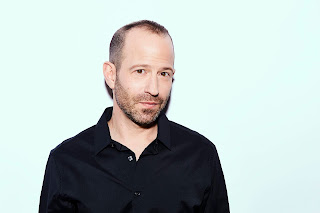 About the Author: Michael Rubens is the author of two YA novels, Sons of the 613 and The Bad Decisions Playlist, and one novel for grownups, The Sheriff of Yrnameer. A correspondent and producer for Full Frontal with Samantha Bee, he has also been a producer for Last Week Tonight with John Oliver and The Daily Show with Jon Stewart. His writing has appeared in places like The New Yorker’s Daily Shouts, Salon and McSweeney's. He lives with his family in Brooklyn. Visit his website at www.michaelrubens.com.

BLOG GIVEAWAY: Win a Copy of Emily and the Spellstone