It's no secret that I adore Michael Symon. That smile. That laugh. That adorably round head.

So when I told my husband I wanted to drive to Cleveland for the day to visit the Rock and Roll Hall of Fame, I had an ulterior motive: it was also to eat at yet another one of my favorite Iron Chef's restaurants. I have eaten at his Detroit restaurant, Roast, on three different occasions, and each time it was a revelation. I don't just adore Michael Symon the person, I adore his food.

So after spending the afternoon at the Rock and Roll Hall of Fame, we then proceeded to drive a few miles south to the adorably quaint Tremont neighborhood to have dinner at Lolita. Can I just say how much I was smitten with this neighborhood? The houses were old but well cared for, and small mom and pop run businesses dotted the blocks among the modest, character-filled homes.

When we arrived at Lolita there was already a line out the door of people waiting to get in. Thank goodness we had reservations! But would you expect anything different from a Michael Symon restaurant on a Saturday evening?

Once inside, the space had an industrial yet homey feel. The bar looked into the open kitchen where the chefs, instead of wearing pretentious chef whites, don a much more practical, yet blue collar ensemble of a navy shirt with a baseball cap. Pretty much the exact thing Symon wore when competing in Next Iron Chef, though Symon doesn't need a baseball cap, what with him having no hair and all :) 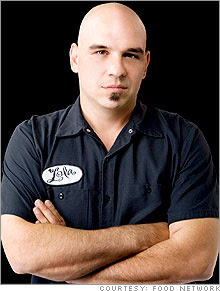 I started my evening with the Lolita bellini which is described as something totally different on the website cocktail menu so I'm trying to remember all that was in it: Champagne, Belgian lambic, lemon, and something else - something with violet in the name... hmmm... well, anyway, whatever it was, it was delicious. Tart and bitter and sweet all at the same time. I had two of them. :) The braised meatballs were nothing to write home about. They were good, but not memorable; a dish that I'm sure was put on the menu to appease picky eaters. But can I just say that the crispy pig tails and ears were out of this world? It was the perfect example of what Symon talks about all the time when he refers the need for balance in a dish: a balance of flavors, tastes, and textures. In this dish, the richness of the fennel-onion agrodolce (sweet and sour glaze) was cut into by the tangy pickled chiles, and then of course you have the crisp texture of the pig tails and ears.

For the main dish I ordered the Buccatini which had pulled pork, pancetta, egg yolk and pecorino cheese. Luscious is probably the best word to describe this pasta. I can still remember the tastes and textures of it in my mouth.

I also ordered a side of polenta to go with my pasta because I have had the polenta at Roast and it is rich and creamy and wonderfully decadent. The polenta at Lolita, while included the same ingredients, was not as enjoyable as the polenta at Roast. Lolita's version was much more cream-of-wheat-like. It felt like I was eating cereal instead of polenta. The flavor was good, it just didn't feel like a dinner dish to me. My husband ordered the hanger steak with a Gorgonzola fondue, pickled onions, arugula and tomatoes which he enjoyed despite not being a fan of Gorgonzola cheese. For dessert we shared the chocolate pot de creme with whipped cream and a salted caramel sauce on top. It was good, but I thought there was a bit too much salt on the top.  I'm one who usually enjoys a sprinkling of salt over top of a dessert, but this time it was a tad too much.