Be careful what you offer 6th graders...

Back in March I was hard pressed to find something to motivate my students to read. They were losing stamina quickly and I needed to do something to raise their spirits. So upon the suggestion of some other teachers on Twitter, we did a March Book Madness where they voted for books and battled it out for their favorite to be champion.

Since I follow quite a few authors on Twitter, I couldn't resist responding to a rather banal tweet of Adam Rex's that ended up turning the tide of the entire results of our March Book Madness: 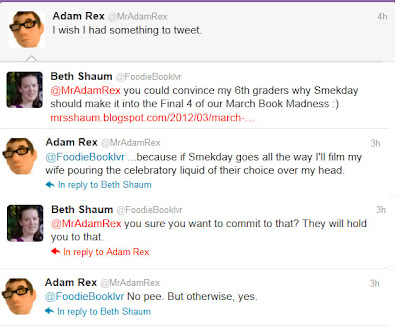 Needless to say, an offer like that easily put Mr. Rex's book in the position of Champion and my students got to vote for the liquid they wanted him to pour over his head (which knowing what we know about 6th graders, was not a fun discussion for me. I had to put quite a few stipulations on what was considered acceptable to ask a grown man pour over himself). This is the result:

What was interesting about this whole affair is that Adam's offer caused a firestorm of debate among students and teachers alike:

"I'm so going to vote for him. I want to see him pour something over his head."
"That's not fair. He's bribing us. No one would vote for Smekday if it weren't for his offer."
"That's totally fair. People voted for books they never read in previous rounds just because people told them to. He's actually giving us something in return for voting for his book."
"Smekday would've never won over The Hunger Games if Adam Rex hadn't gotten involved."

This was just a sampling of the back and forth I heard in my classroom... I won't even tell you how heated it got in the teacher's lounge. :)

But I look at it this way: if we're getting passionate and invested in conversations about BOOKS, then I guess we were able to get out of our reading rut after all and that's definitely a good thing. Not to mention that yes, had Adam Rex not intervened, I'm sure The Hunger Games would have won. But just about everyone has already read The Hunger Games. What a win for The True Meaning of Smekday did was get kids who would have otherwise turned their nose up at it to actually read it now. Plus, some of the kids who have already read Smekday are feeling more compelled to read Rex's current novel Cold Cereal (which I am listening to the audiobook of right now).

So I think it was win-win. My kids got to watch an author make a fool of himself for them, and the author got more kids to read his book.

Now that you know what Adam Rex is willing to do for kids, perhaps you should go out and read one of his books too...

Reviews:
The True Meaning of Smekday
Chloe and the Lion