The most exciting thing that came in my mailbox this week actually isn't for me.  I've been pushing and fighting to get e-readers back into our school because of the success that so many students have had with them since I started allowing them in my classroom back in January.  They were allowed for a while, and then they were banned because some people were concerned they were creating a "haves" and "have-nots" situation.  I argued my case that most of the students in my class who don't have their own e-readers don't really want them anyway because they like regular books better and my classroom coupled with our school library has tons of books from which to choose, so it's not like the kids who don't have e-readers are being denied reading material.

I personally could live without an e-reader.  I love the geography of a real book.  Flipping through the pages, being able to visually see how much farther I have until I'm finished.

But, I'm also someone who will push for a kid to read a book in any way that motivates them to read.  So if I have a handful of kids in my class who prefer to read on a Kindle, then I'm going to let them read on a Kindle.

So a compromise was made to let e-readers back in the building.  Our school purchased 5 Nooks: 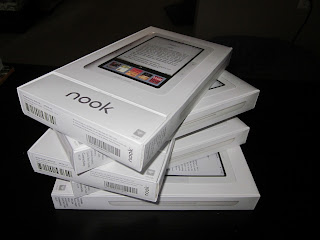 And I am in charge of keeping track of them and checking them out to students.  Even though I have never been a huge fan of e-readers myself, I'm excited about the possibilities for motivating more students with these.  And I'm also excited to try one out for myself.  I mean, I can't expect to be in charge of the Nooks if I don't know how to use them myself! :o)

Girl with a Pearl Earring by Tracy Chevalier