Travel as a Political Act by Rick Steves

Rick Steves is one of the foremost Americans who is lucky enough to travel for a living.He has built his business on the idea of traveling “through the back door.” Despite the snorts of snickers this phrase might impart on immature high school boys, his meaning is to take “the road less traveled” – though the very definition of someone carrying around a travel guidebook is generally not someone who is willing to take the road less traveled. Still, Steves tries to balance his guidebook recommendations, giving information on heavy-touristed must-sees (The Louvre, Buckingham Palace, Neuschwanstein Castle, etc.) and pleasantly surprising back door finds (A little souvenir shop in Berlin that will stamp your passport with a former East Berlin checkpoint stamp).

So if anyone has the right to preach the gospel of “how to travel”, it’s Rick Steves. And that’s just what he does in Travel as a Political Act – preach that is. It’s not excessively preachy, but you do get the sense that he does get a little self-righteous at times. But then again, he has every right to be. In his many years of travel, he has managed to gain a world perspective that is not easy to acquire by “vegetating in one little corner of the earth all one’s lifetime” (Twain) as so many Americans do.

There was so much good, quotable material in this book, that my post-it flags were working overtime: 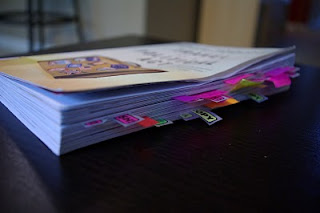 During his talk of his time in Germany, I always sat up a little straighter, having myself spent two years of my life in Germany. I was moved by Steves’ description of their parliament building, the
Reichstag, one of my favorite buildings in Europe:

“Germany’s old-meets-new parliament building comes with powerful architectural symbolism. It’s free to enter, open long hours, and designed for German citizens to climb its long spiral ramp to the very top and literally look down (through a glass ceiling) over the shoulders of their legislators to see what’s on their desks. The Germans, who feel they’ve been manipulated by too many self-serving politicians over the last century, are determined to keep a closer eye on their leaders from now on.

Spiraling slowly up the ramp to the top of the dome during that festive opening week, I was surrounded by teary-eyed Germans. Now, anytime you’re surrounded by teary-eyed Germans… something exceptional is going on. Most of those teary-eyes were old enough to remember the difficult times after World War II, when their city lay in rubble. Forthese people, the opening of this grand building was the symbolic closing of a difficult chapter in the history of a great nation” (11-12).

Steves does assert many of his political leanings in this book and I’m sure that could turn people off on the other side of the political spectrum, but the message of this book goes beyond politics. It speaks to our very humanity and the need to understand how, despite our differences, people around the world are really the same. When you let the sensationalism and fear-mongering of the media dictate your judgments, that's how wars get started and that's how they continue to get perpetuated.

I was touched and impressed by Steves reporting on his trip to Iran. His thoughts were very balanced: giving the positives and negatives of the society, but all the while, remaining true to his political ideology: you should be forced to get to know people before you bomb them. During his time in Iran, he was met with nothing but friendly, amiable people, and while he was disturbed by many things, he also had many misconceptions of the Iranian people and culture obliterated.

If you have been hesitant to travel and see the world, I highly suggest you read this book. It just might change your mind.