Remember, Remember the 9th of November

Twenty years ago today the world watched the Iron Curtain unravel when The Wall came down in Berlin. On the eve of my tenth birthday, I wasn't old enough to understand why there was a wall coming down, but I did know that whatever the reason, this was a big moment in the history of the world.

Fast forward fifteen years later, I was living in Germany with my husband when we visited Berlin for the first time. I couldn't believe what a youthful, vibrant spirit this city possessed given its oppressive past. There is an interesting dichotomy of lifestyle in Berlin. People have moved forward while still being reminded on every corner what happened from 1961-1989.

Those first few minutes in Berlin began a new phase of my life. It was there that I realized how little I actually learned in school. I didn't understand the significance of studying history until I walked the streets of a city that skitters on the border of the past and the present. Textbooks can never make you feel history; in an attempt to be objective and non-biased, they take away any sort of feeling of desire and urgency to understand WHY. When you go to Berlin, you can't help but understand because the WHY is everywhere.

Berlin quickly became my favorite city on earth. I've been there three times, and each time I go I learn something new. It's been extremely difficult for me to explain and pinpoint my love for this city, but I think I can now attempt to do so.

When boys in my social studies classes talk about loving history, for most of them it's because they love learning about wars, especially World War II. But to me, The Cold War is more exciting to study because it was all about the suspense, the possibility of going to war. Here you had these two superpowers, two differing ideals, ready to go to battle to fight for their honor.

But the near 30 year showdown in Berlin didn't end in war. The people of East Germany and all of the communist puppet states of Europe could see past the propaganda and understand that their government was oppressive. And instead of a war, the Iron Curtain unraveled by the will of the people to tear it down. People power, not weapons, is what caused that wall to fall.

So twenty years later, Berlin thrives and progresses while still managing to hold hands with the past. You never have to worry about people forgetting to remember what happened on the 9th of November. And despite not being there today in body, I am there in spirit. Even though I've never lived in Berlin, I still feel like I, along with John F. Kennedy can say, "Ich bin ein Berliner." 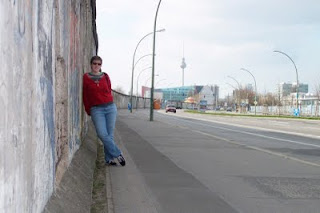 Email ThisBlogThis!Share to TwitterShare to FacebookShare to Pinterest
Labels: berlin