For my husband's birthday back in August I purchased tickets to see "An Evening with Anthony Bourdain" at the Palace Theater in Columbus. My husband has family near Columbus so I thought that would be a perfect opportunity to go visit them for the weekend while also seeing a presentation by one of our favorite TV personalities.

I have mentioned Tony Bourdain's name several times here on this blog because the opening line to his show No Reservations is what inspired me to create this blog in the first place. My husband and I watch his show religiously whenever a new season of it rolls around on The Travel Channel. 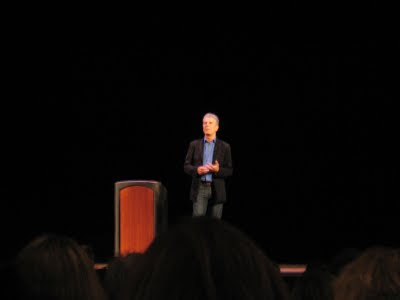 I had absolutely zero expectations for the evening and just went into it hoping to gain more respect and insight into The Travel Channel's Bad Boy of Globe-Trotting. Tony by himself on stage for two hours was extremely entertaining and I have to hand it to him for being so articulate, poignant, and humorous all rolled into one. Part Bill Cosby, Chris Rock, Dee Dee Ramone, and Gordon Ramsay, he manages to get you to ponder the meaning of life while laughing hysterically at the trials, misfortunes, and obscenities of his travel stories.

But all the laughter and life lessons were drowned out by the incessant gum flapping of the drunkards sitting next to us. They spent over half the show talking to each other rather than listening to Tony. All of the people around them, including me, had steam coming out of our ears we were so angry. Now I am not a confrontational person in the least. In fact, when it comes to fight or flight responses, 99.9% of the time I choose flight. But I was so incredibly upset at these fools ruining my evening, I found myself on several occasions, blurting out expletives in their direction and confronted them twice by telling them to shut up. As the show progressed, their behavior got so erratic and bizarre that we moved over to the two empty seats beside us. During the Q & A portion of the evening, the lady blurted out a question without being called on and then wouldn't let Tony move on to the next person. Many of the people around her told her to shut up and I actually found myself yelling at Tony, "There are actually people over here in line who are WAITING to ask you questions. Why don't you call on them?"

Well apparently Tony's response to her question wasn't good enough because she wanted to ask him another question. So she actually followed protocol and got in line this time to do so... but she was so drunk (or high, I'm not sure which) that she went and sat back down and got back up on three different occasions - presumably because she couldn't remain upright long enough to wait to ask her question.

I am so disappointed with the turn of the events of the evening because I really did enjoy what I could hear of his presentation (even the Rachael Ray jokes). I'm even contemplating purchasing tickets to his April show in Chicago because I felt like I missed so much from his talk last night. My husband and I have never been to Chicago before and we've always wanted to go, so this might be our excuse to do so. Maybe the next time I might be able to see past my cloud of anger long enough to think of a question to ask him. On the drive home this morning I thought of a really great question I would have loved to ask him but of course I was too upset last night to think of anything other than how some drunk people ruined my evening.
at 6:41 PM