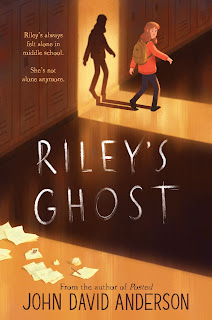 From the author of Posted comes a ghost story pulled from the darkest shadows of middle school—and a tale of one girl’s attempt to survive them.
Riley Flynn is alone.
It feels like she’s been on her own since sixth grade, when her best friend, Emily, ditched her for the cool girls. Girls who don’t like Riley. Girls who, on this particular day, decide to lock her in the science closet after hours, after everyone else has gone home.
When Riley is finally able to escape, however, she finds that her horror story is only just beginning. All the school doors are locked, the windows won’t budge, the phones are dead, and the lights aren’t working. Through halls lit only by the narrow beam of her flashlight, Riley roams the building, seeking a way out, an answer, an explanation. And as she does, she starts to suspect she isn’t alone after all.
While she’s always liked a good scary story, Riley knows there is no such thing as ghosts. But what else could explain the things happening in the school, the haunting force that seems to lurk in every shadow, around every corner? As she tries to find answers, she starts reliving moments that brought her to this night.
ABOUT THE AUTHOR

John David Anderson is the author of many highly acclaimed books for kids, including the New York  Times Notable Book Ms. Bixby’s Last Day, Posted, Granted, One Last Shot, and Stowaway. A dedicated root beer connoisseur and chocolate fiend, he lives with his wonderful wife, two frawesome kids, and clumsy cat, Smudge, in Indianapolis, Indiana. You can visit him online at www.johndavidanderson.org.

Foodie Bibliophile: As a librarian in a K-8 school, I have often been attuned to the readers who aren't quite ready for YA, but still want something more mature than what is usually offered in a typical middle grade novel. What I have appreciated about your books is how they speak to that in-between age... of students who want to explore their burgeoning adolescence but are still not emotionally in a place where YA is in their wheelhouse.  What made you decide to write for this age group and how have you navigated it in the publishing world, since straddling lines, genres, and age groups is likely not an easy feat, even after you've finished the writing process.

John David Anderson: I think “in-between” describes how a lot of young readers (and some older ones like myself) feel much of the time: never quite sure where you stand in the world, with your family or friends, never quite sure of yourself or your worth. Straddling the line between being the person you think you are, the person you want to be, and the person other people want you to be. That perpetual uncertainty, that feeling of always being in a liminal space, really starts to sink its claws into you by the age of twelve or thirteen—at least it did for me. And it’s something I empathize with and appreciate in my readers—the inner strength required to grapple with all that ambiguity and self-doubt. Of course, it’s a struggle that continues into young adulthood and beyond, but I think middle grade readers are especially attuned to those feelings. In that way, the genre probably matters less than the mindset of the character. A coming-of-age story can take place in the country or the city, in a fantasy kingdom or another galaxy. I’ve always been more interested in the battle with insecurity and the quest for agency and self-actualization than conflicts with dragons or supervillains or ghosts, though these do make things more exciting.

As for the publishing world, I’m very fortunate to have a publisher and an editor who are willing to let me cross genre lines and reach slightly different audiences. I think they see it as their goal to help me write the best stories I can, regardless of setting or tropes, stories that (hopefully) speak to kinds of social and emotional conflicts my young readers deal with daily. I agree, it’s not easy—for me, writing never is--but if it gets kids reading, thinking, laughing, crying, and questioning, it’s worth it.

FB: How is Riley's Ghost different from your other novels and what have you learned about yourself as a writer since publishing your first book?

JDA: Riley’s Ghost is dark. Not pitch-black, not hopeless by any stretch, but definitely gloomier than anything I’ve published before. Partly that’s a function of genre—it is a ghost story, after all, bordering on psychological thriller--but mostly it’s a reflection of the emotional place I was in when writing it. I think many of us, young and old, have had our imaginations travel to dark places in the last year or two, and personal loss only intensified my connection with Riley as she grappled with issues of legacy and memory and guilt. Riley is not some good-as-gold, perfect protagonist ready to leap into the fray. She’s angry, confused, hurt, isolated—and that’s before any ghosts show up. I probably identified with her emotional journey more than any character to date.

As for things I’ve learned—the list is much too long and a work in progress, so I’ll just pick one. I’ve learned to trust the process more. (Note, I said trust, not like. There are still parts of it I dread.) I’ve resigned myself to working through eight or nine drafts, which means I’ve learned how to make more of a mess in the beginning and how to clean up those messes at the end. I don’t fret as much over a cliché in draft two, knowing/hoping I’ll come up with something more original by draft five. I’ve learned to trust the editorial process (much to my editor’s chagrin as it probably means more work for him). I often tell young writers that no story is ever perfect, only finished. I still think that’s true, but I now have a much better idea of what “finished” should look like and all the hard work that’s required to get there.

I’ve also learned that revision, which I find challenging, is incredibly bad for my diet. I’m looking at you, can of Pringles.

FB: As I was reading Riley's Ghost, I picked up on nuanced themes that went beyond typical ghost story tropes, such as bullying, mental health, and family struggles. What was it about a ghost story that felt like a natural way to explore these issues?

JDA: What I love about a good ghost story is how it forces the present and the past to confront each other. In that way, it is ideally suited to explore the repercussions of our actions and to gauge the amount of progress we’ve made in terms of handling our problems (like bullying or anger management or family conflicts). Most of us have done things in the past that we aren’t particularly proud of or that we regret, but when those things manifest themselves as potentially malevolent beings chasing you down the hallway…well, it’s harder to turn a blind eye.

Just as important, though, is the ghost story’s potential for redemption. The process of “laying a ghost to rest” works brilliantly as a metaphor for overcoming all kinds of mental, spiritual, and emotional struggles. Forgiveness, empathy, understanding—these are the positive products that can come with confronting the ghosts of our past.

That all being said, I also felt that there weren’t enough scary stories out there for the middle-grade crowd. I wanted to write something that quickened the pulse a little.

Also, middle-school is just really scary. I’ve been there. I know.

FB: What is the most meaningful thing a reader has ever told you and what do you hope Riley's Ghost will mean to readers?

JDA: I don’t know about most meaningful, but lately I’ve been hearing from several parents who have connected with their tween by reading one of my books aloud together. I always hope that my books speak to some young reader out there, of course, but when the book becomes a catalyst encouraging families and friends to talk, share, laugh, and cry with each other? That’s the whipped-cream frosting on the triple-layer chocolate cake. I won’t lie, I also love to hear that one of my books is somebody’s favorite, even if it’s only for a day.

As for Riley’s Ghost in particular…I hope that it keeps them madly turning pages to see what fate befalls her, if she makes it out of that place alive. Then, after they’ve closed the book, I hope it encourages them to reflect on all the ways we as human beings manage to hurt each other, intentionally or not, and what it takes to heal those wounds. I’m not sure I have the answer, mind you, I just know the question is worth asking.

FB: Since the theme of my blog is about food, books, and travel, I always end interviews with the same question: What is your favorite food, book, and place you've ever traveled?

JDA: I’m sure my answer would be different if you asked me tomorrow, but for today I’m going with:

Food: Chicago-style deep-dish pizza with sausage, spinach, pepperoni and fresh garlic (the spinach is to help you delude yourself about your life choices).

Book: Hundreds of possibilities, but this time we are going with Slaughterhouse Five. If it has to be a kid’s book, let’s go with Winnie-the-Pooh.

Place: Most recently, Angel’s Landing in Zion National Park (it’s about the journey, not the destination). Also Narnia, Tatooine, and Middle-Earth.