Audiobook Review: Beautiful on the Outside by Adam Rippon 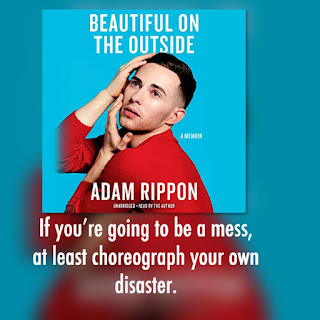 When Adam Rippon became the media darling of the 2018 Winter Olympics, it was because he made the decision to soak in the experience of the Olympics rather than pushing to win the gold medal. At 28, he knew that was likely not possible. But what he didn't expect was that despite not going home with a gold medal, Adam Rippon really was the winner of the 2018 Olympics. He was joyful and sassy and shared every exciting moment with his fans.

Adam's sass has become his trademark personality trait, but sass can quickly come off as bitchiness if you're not careful. The reason his sass never comes off as bitchy in this book or in his life is because Adam is not a catty gossip. If he is talking smack about anyone, it is only himself. The only time he speaks overwhelmingly negatively about people in this book are when he describes the actions of a possessive, borderline abusive ex-boyfriend, when he describes the horrible behavior of his former coach Nikolai Morozov, and also when he discusses the manipulative behavior of Mike Pence when he tried to have a meeting with Adam before the Olympics. But as you learn in comedy, always punch up, not down. He spoke truth to power in those moments and used the rest of the book to be both hard on himself and to give himself some grace.

Verdict: I wanted to be BFFs with Adam before reading this and I want to be even more so now that I've read what an amazing, hardworking, honorable man he is -- despite the Khardashian-like trashiness he tries to portray himself as in front of the cameras. That facade is all a fun ruse, a joke he even lets the public in on, but if you don't know a lot about him, doesn't always translate for those who see him on TV in small doses. Also, other than missing out on the included photographs in the physical book, I highly recommend listening to the audiobook instead of the physical book because, of course, Adam narrates it himself.

My only criticism of this book is more a commentary on our culture. All I could think about when I was listening to the audiobook is how much the public would not allow or excuse Adam's behavior in a female skater. She WOULD come off as bitchy and ungrateful and be expected to not show any sort of humor or emotion. So as much as I love Adam, I also recognize that loving this persona that he has created would only be granted to a man and not to a woman.

If you buy this book or any book through Amazon, it is my hope that you also regularly patronize independent bookstores, which are important centerpieces of thriving communities. While I am an Amazon Affiliate, that by no means implies that I only buy my books through their website. Please make sure you are still helping small, independent bookstores thrive in your community. To locate an independent bookstore near you, visit IndieBound.
at 7:31 PM